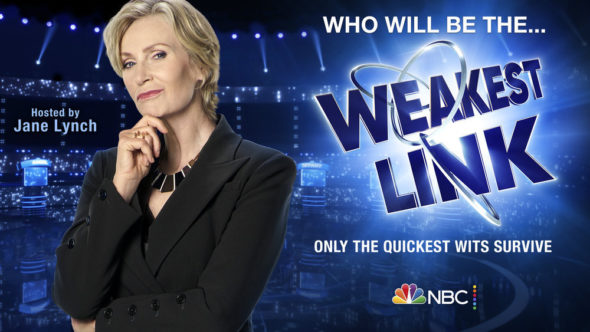 NBC had some great success with The Weakest Link series for a few seasons nearly 20 years ago. Now, the peacock network has revived the game show with a new host, Jane Lynch. How will this version do? Will Weakest Link be cancelled or renewed for season two? Stay tuned. *Status Update Below.

Weakest Link pits contestants against one another while also forcing them to work together in a trivia contest. In each episode, eight contestants enter the studio as total strangers but must work together to bank the maximum amount of prize money available in each round. At the end of each round, contestants vote to eliminate the fellow contestant they consider to be the “Weakest Link” in the chain. The contestant who receives the highest number of votes leaves the game as the host utters the iconic phrase, “You are the Weakest Link. Goodbye.” By the end of the episode, a single player can win up to $1,000,000.

What do you think? Do you like the Weakest Link TV series on NBC? Should it be cancelled or renewed for a second season?

*1/26/21 update: Weakest Link has been renewed for a second season on NBC.

I. Love the show Please renew

I love the show and Jane. Please renew!!

Renew it for another season. The host is a hoot! Love it!

The Weakest Link should be renewed.

Waist of time. Show host is wrong for this show,no personally.

Why did they bring this show back? It was always a huge popularity contest, where very strange people, especially on the George Gray syndicated edition, would gang up on smart contestants. They never cared about winning huge amounts of money. All that mattered to them was making alliances. Ratings haven’t been great since the premiere. Cancel.

Renew! It is funny! Not boring. I foundmyself wanting certain ones to win. Keeep it!