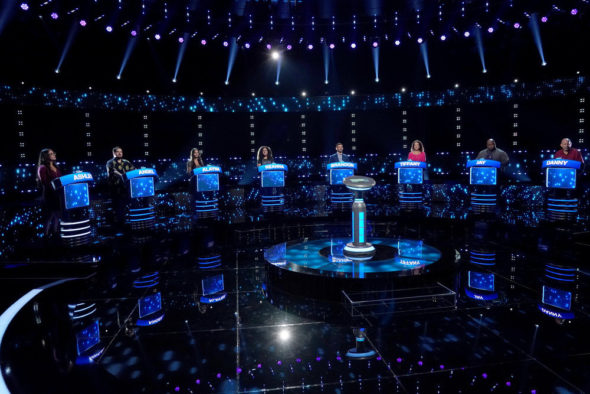 TV show description:
A revival of the 2000’s primetime and syndicated game show that was hosted by Anne Robinson, Weakest Link pits contestants against one another in a trivia contest while also forcing them to work together at the same time.

In each episode, eight contestants enter the studio as total strangers but must work together to bank the maximum amount of prize money available in each round. The contestants take turns answering general knowledge questions to build chains of correct answers. Consecutive correct answers greatly increase the value of the chain, while incorrect answers break the chain and force the contestants to start over on the lowest rung with the smallest amount of money. Contestants can “bank” an accumulated amount of cash but then, the chain starts over.

At the end of each round, contestants vote to eliminate the fellow contestant they consider to be the “Weakest Link” in the chain. The contestant who receives the highest number of votes leaves the game as the host utters the iconic phrase, “You are the Weakest Link. Goodbye.”

After several rounds, the last two remaining contestants compete to win the banked cash from all of the previous rounds and can win up to $1,000,000.

What do you think? Do you like the Weakest Link TV show? Do you think it should be cancelled or renewed for another season?

I love this show and Jane Lynch is perfect! I give it a 10

The host is just not as good as Anne Robinson. Her voice is high and her voice just isn’t as firm-sounding. But it’s still worth watching. 🙂

I liked it. I hope it will be renewed for another season.