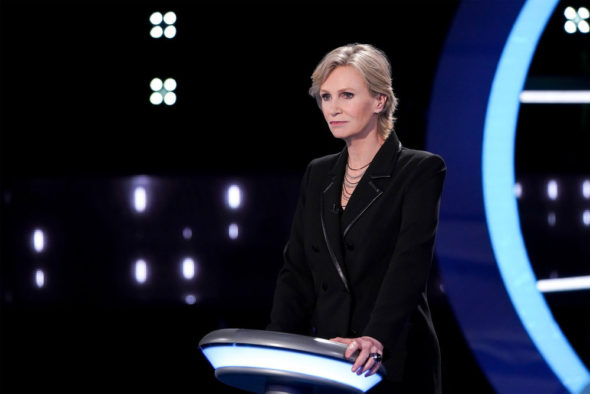 NBC isn’t saying “Goodbye!” to the Weakest Link TV show. The peacock network has renewed the game show revival for a second season. Production on 13 new episodes will begin later this year.

Hosted by Jane Lynch, Weakest Link pits contestants against one another while also forcing them to work together in a trivia contest. In each episode, eight contestants enter the studio as total strangers but must work together to bank the maximum amount of prize money available in each round. At the end of each round, contestants vote to eliminate the fellow contestant they consider to be the “Weakest Link” in the chain. The contestant who receives the highest number of votes leaves the game as the host utters the iconic phrase, “You are the Weakest Link. Goodbye.” By the end of the episode, a single player can win up to $1,000,000.

The first season of Weakest Link averages a 0.67 rating in the 18-49 demographic and 3.77 million viewers. The season wraps on February 1st.

UNIVERSAL CITY, Calif. – Jan. 25, 2021 – The “Weakest Link,” NBC’s newest hit game show phenomenon hosted by Jane Lynch, has been renewed for a second season. The popular series is a British import based on the iconic quiz show format distributed by BBC Studios.

Production on the new season, set for 13 episodes, will begin later this year.

“Audiences have clearly embraced this smart, fun and completely addicting show, and it’s been a great addition to the NBC lineup,” said Jenny Groom, Executive Vice President, Unscripted Content, NBCUniversal Television and Streaming. “A huge thank you to Jane, our friends at BBC Studios, Universal Television Alternative Studio and everyone who has been instrumental in keeping the DNA of the original format intact while simultaneously adding new flourishes that make it as relevant and popular as ever.”

“I’m thrilled that ‘Weakest Link’ will return for another season,” Lynch said “It has been my honor to bring back this classic game show loved by millions. I also look forward to challenging the brain power of our players while baiting them to turn against one another for the chance to win some life-changing cash. And, of course, for my own enjoyment, and not to mention the opportunity to say ‘You are the weakest link. Goodbye.’ several times an episode.”

“As the fastest and fiercest game show on TV, ‘Weakest Link’ has been immortalized in pop culture,” said Valerie Bruce, General Manager of BBC Studios, Los Angeles Productions. “The format has proven longevity, attracting global audiences for the past two decades and we’re thrilled to celebrate its latest success in the U.S. Our Los Angeles production arm is excited to partner with NBC on a second season of the series with Jane Lynch, whose quick wit, humor and shrewdness are captivating.”

On the ratings front, “Weakest Link” was the #2 most-watched new broadcast alternative series of the fall and won its 10 p.m. Mondaytimeslot in all key demos. In most current figures for the season, “Weakest Link” is averaging a 1.2 in 18-49 and 5.6 million viewers, including linear, digital and VOD. In addition, the Sept. 29 premiere episode is up to a 1.9 in 18-49 and 7.7 million viewers when including linear and digital viewing.

The hybrid game show sees contestants answer general knowledge questions to bank prize money across multiple rounds. At the end of each round, the contestants vote out who they perceive to be the “Weakest Link” remaining.

The massively successful “Weakest Link” format distributed by BBC Studios has been produced in 46 territories around the globe, with more than 1,500 episodes having aired in the UK alone.

“Weakest Link” is casting now for its second season. Put your trivia skills and pop culture knowledge to the test. If you have the speed and smarts to win the grand prize, apply at theweakestlinkcasting.com. You must be 18 years or older, and other terms and conditions may apply.

Lynch is a five-time Emmy Award and Gold Globe Award winner who received back-to-back Emmys for her role as host of NBC’s “Hollywood Game Night.” Her last Emmy win came in 2019 for Outstanding Guest Actress in a Comedy Series for her role in “The Marvelous Mrs. Maisel.”

ABOUT BBC STUDIOS
BBC Studios, a global content company with British creativity at its heart, is a commercial subsidiary of the BBC. Formed in 2018 by the merger of BBC Worldwide and BBC Studios, it spans content financing, development, production, sales, branded services and ancillaries. BBC Studios’ award-winning British programs are internationally recognized across a broad range of genres and specialties. The company has offices in 22 markets globally, including seven production bases in the UK and production bases and partnerships in a further nine countries around the world. BBC Studios, which makes over 2,500 hours of content a year, is a champion for British creativity around the world and a committed partner for the UK’s independent sector. In the Americas, BBC Studios – with team members across the region – operates two production units: one in Los Angeles, responsible for ratings juggernaut and Emmy Award-nominated “Dancing with the Stars” and multi-award-winning “Life Below Zero,” and the other in Brazil, where local productions “Dancing Brasil” and “Bake Off Brasil” have become breakout hits. The company manages joint venture relationships with AMC Networks for flagship channel BBC America (U.S.) – home of original series “Killing Eve” and global brands “Seven Worlds: One Planet,” “Doctor Who” and “Top Gear” – and with ITV for SVOD service BritBox (U.S./Canada), as well as a strategic partnership in Canada with Blue Ant Media for BBC Earth Channel. The company also operates a robust linear and digital content sales and co-productions operation, as well as a franchise management business.Currently, the company is readying the launch of BBC SELECT, a digital streaming channel offering unrivalled content across culture, politics and ideas that will be available on Amazon Prime Video Channels and the Apple TV app in early 2021.

ABOUT UNIVERSAL TELEVISION ALTERNATIVE STUDIO
Launched in 2016, Universal Television Alternative Studio, a division of Universal Studio Group, is a leading supplier of successful unscripted content and formats, and creates, develops and produces a diverse slate of original series domestically and internationally. Among the studio’s notable projects are Emmy Award-winning “World of Dance” from Jennifer Lopez, Dawyne Johnson’s “The Titan Games” and songwriting competition “Songland.” The studio is also responsible for the high-stakes game show “The Wall,” which has been sold into 27 territories internationally, “Hollywood Game Night,” which has been remade across 21 territories, and “Making It” from Emmy-nominated hosts Amy Poehler and Nick Offerman.

What do you think? Have you watched the revival of the Weakest Link TV show? Are you glad that it’s been renewed for a second season on NBC?

I love Weakest Link, and Jane Lynch is a great host of this game show. So happy it has been renewed for a second season. Thamks, NBC.

I always watch it especially like Jane Lynch as host

This show has got to be the best show on the air every week. With Jayne mastering her hosting spot. She was born to do this show. She does it so well. Look forward to watching every week. NBC don’t ever cancel this show it has way too many fans now. Renew every year. Bravo !!

No. I think this game show is depressing a_ the putdowns demoralising

Awful hate Jamie Lynn good in Glee and Mrs. Maisel marvelous so funny in it. Other waist my time game show super confusing too.