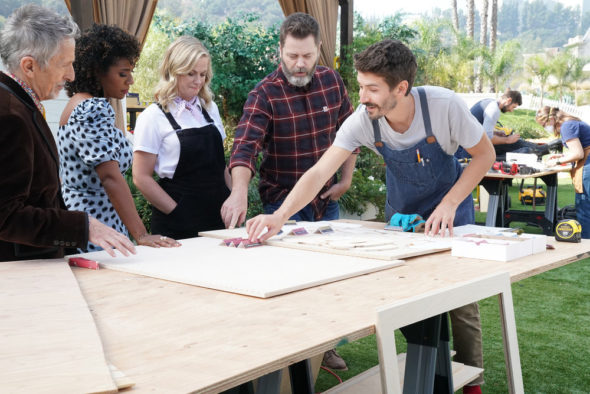 What creative things will come out of the third season of the Making It TV show on NBC? As we all know, the Nielsen ratings typically play a big role in determining whether a series like Making It is cancelled or renewed for season four. Unfortunately, most of us do not live in Nielsen households. Because many viewers feel frustrated when their viewing habits and opinions aren’t considered, we invite you to rate all of the third season episodes of Making It here.

An NBC competition series, Making It is executive produced and hosted by Amy Poehler and Nick Offerman. Expert judges Dayna Isom Johnson and Simon Doonan return, along with woodshop master Jimmy DiResta. Season three celebrates how “making” brings together friends, neighbors, and families with a new group of the country’s most talented makers. From a retired professional baseball player to a taxidermist, these DIYers bring skill and heart as they create with mediums ranging from food to felt while sharing their unique stories and what drove them to pursue their passion for all things handmade. The winners move on to the next round of the competition and, in the end, one contestant will be crowned “Master Maker”.

What do you think? Which season three episodes of the Making It TV series do you rate as wonderful, terrible, or somewhere between? Do you think that Making It should be cancelled or renewed for a fourth season on NBC? Don’t forget to vote, and share your thoughts, below.