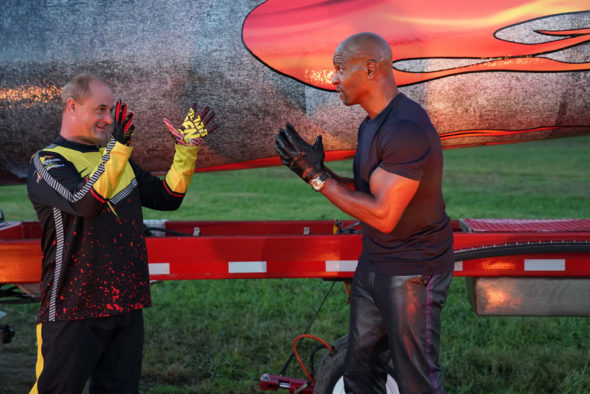 An NBC talent competition series, the America’s Got Talent: Extreme TV show is a spin-off of the long-running America’s Got Talent series. The judges in the first season are series creator and executive producer Simon Cowell, professional motorsports competitor Travis Pastrana, and WWE wrestler Nikki Bella. AGT’s Terry Crews hosts. The franchise expands with this series which showcases outrageous, unique, and jaw-dropping acts too big to be confined to a theater stage. Acts include feats of gymnastics, heights, fire, vehicles, and more. Single contestants or groups vie for a chance to win a $500,000 prize and the title of “AGT: Extreme” champion.

*7/26/22 update: America’s Got Talent: Extreme has been cancelled by NBC, so there won’t be a second season, at least for now.

This is the worst show I really miss the original America’s Got Talent this one should be taken off the year it’s ridiculous. I would not waste my time watching another episode. If it ain’t broke don’t fix it.

Don’t like agt extreme at all , saw bigger stunts at winter olympics . And where did they get those judges a joke come on now

Are they trying to get someone killed? Absolute garbage show! I will not watch a second episode of this madness. Please bring back the original style program of AGT

This show sucks, ridiculous sorry don’t think it will last at least I hope not!

I think it is horrible, won’t waste my time & WHO & WHERE DID HE GET THOSE JUDGES? Seriously they’re absolutely awful!!!

Should of left. Show alone

I think the very talented people riding bikes in Queens NY definitely should be performing their stunts in a safer place on less congested roads so as not to endanger their lives as well as those driving in automobiles. It’s not a good example for anyone!

I think agt extreme will be lucky if gets season 2