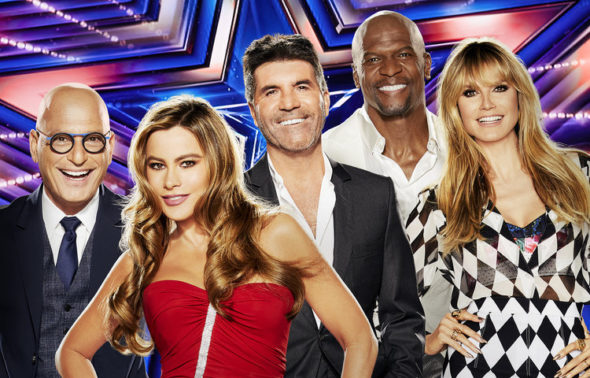 America’s Got Talent has become a staple of the NBC summer schedule for 15 years and it’s remained one of the network’s highest-rated shows. It’s a sure bet that it will be renewed for season 17 but, for the first time since season two, the program will air new episodes just once a week. Could the end be near? Will America’s Got Talent be cancelled at some point soon? Stay tuned.  *Status Update Below.

America’s Got Talent is a talent competition that features an impressive array of singers, dancers, comedians, contortionists, impressionists, magicians, ventriloquists, and hopeful stars. The winning act receives a $1 million prize and the chance to headline in the America’s Got Talent Live show in Las Vegas. In season 16, Terry Crews returns as host, and Howie Mandel, Simon Cowell, Heidi Klum, and Sofía Vergara are back at the judge’s table. This season promises some of the wildest acts to ever grace the AGT stage after an unprecedented number of submissions poured in from across the country.

9/16 update: You can see the latest night’s ratings in context.

For comparisons: Season 15 of America’s Got Talent on NBC averaged a 1.02 rating in the 18-49 demographic and 7.29 million viewers.

What do you think? Do you like the America’s Got Talent TV series on NBC? Should it be cancelled or renewed for a 17th season?

Simon wasn’t kind of Storm Large for having lost her edge. Had she come out and did the same thing as her audition she would have been criticized as doing the same old thing. I think she was showing her diversity. She is, by far, the best in this year’s competition.