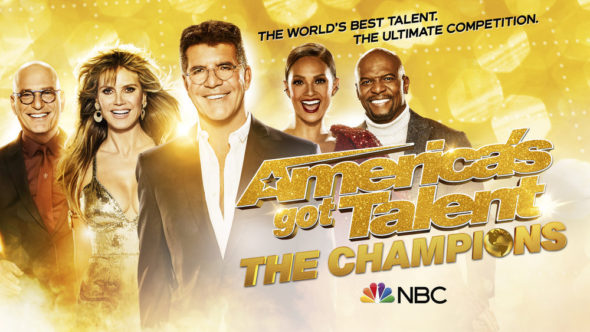 An NBC talent competition, America’s Got Talent: The Champions features winners, finalists, and fan-favorites from America’s Got Talent and the global Got Talent franchise. Terry Crews hosts the AGT all-star edition, with Simon Cowell, Heidi Klum, Alesha Dixon, and Howie Mandel judging the talent, who compete in an “Olympic-style” contest for the title of World Champion.

2/18 update: You can see the latest night’s ratings in context.

For comparisons: Season one of America’s Got Talent: The Champions on NBC averaged a 1.70 rating in the 18-49 demographic and 10.13 million viewers.

What do you think? Do you like the America’s Got Talent: The Champions TV series on NBC? Should it be cancelled or renewed for a third season?

Yes it should be cancelled after last winner. That is not talent. It was political shame. Such good talent. I feel they were slap in the face. I will never watch it again.

I’m watching AGT, as usual!!!! They keep saying, hurry up and get your vote in!!! hurry up and get your vote in, however the voting has been shut down for 3 days??? If this is a rerun, why can’t NBC state that on the bottom of the screen? REALLY-NBC-REALLY????? Slackers!!!! (As Howie sits there and says, “as America’s voting tonight!” No, they are not Howie, we are watching a rerun… NBC is too slack to notify their watchers…. On that note I’ll just stop watching the show!!!!

Simon is well known for being unsupportive and sabotaging a valid talent contestants. I already unsubscribed with AGT, didn’t watch AGT The Champions Finale, and boycotting any future AGT Talent Show. I am sad that Marcelito Pomoy didn’t win.

This Show Is Absolutely Horrible and Disgrace To All The True Talented! They Don’t Give Them A **** If Your Talented Or What, All They Care Is Fookin Ratings And To Get Viral On The Internet!
Glad Many Of Them Unsubscribed To This Show! Simon Cowell Is A Fookin Racist!

Everybody wants to be a singer…. You may have the courage to get upon that stage in front of the world…..however, doesn’t mean you can sing!!!?

Racist and sexist, like a lot of NBC shows, and most of Simon Cowell exploits! Although Simon has become a little more accepting with the birth of his son, he’s still a crass misogynist, and my way or the highway manipulator!