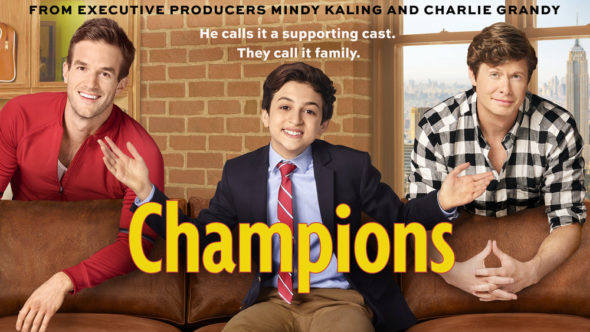 Once upon a time, the Peacock Network was renowned for its comedy lineup. Although recently, NBC has had achieved some success sitcoms like The Good Place and its revival of Will & Grace, it is still trying to bring back the laughter and its “Must See TV” slogan. The Champions TV show is the network’s latest look at the funny side of life. Can it live up to its name in the Nielsen ratings race? Will Champions be cancelled or renewed for season two? Stay tuned. **Status update below.

From creators Charlie Grandy and Mindy Kaling, Champions stars Anders Holm, Andy Favreau, J.J. Totah, Fortune Feimster, Ginger Gonzaga, Mouzam Makkar, Yassir Lester, and Robert Costanzo, with Kaling guest starring. The new NBC TV series centers on Vince (Holm), a former high school baseball star who abandoned his aspirations to run his family’s Brooklyn gym and lives above it with his sweet, naïve younger brother, Matthew (Favreau). When Vince’s old fling, Priya (Kaling) drops off their teenaged son, Michael (Totah), so the boy can attend a New York school for the performing arts, Vince and Matthew must rise to the challenge of providing a good home for the young man, despite their utter lack of parenting experience. Fortunately, the gang at the gym is ready to provide some guidance, whether it’s helpful or not.

What do you think? Do you like the Champions TV series? Should it have been cancelled or renewed for a second season on NBC?

**6/29/2018 Status Update: Champions has been cancelled, there will be no season two. Details here.

So sad to see that some swhows can’t make it just because maybe the advertisers don’t like certain types of genre of shows. No ty I do whT others do. Watch stuff with out ads.

Please renew Champions! I just binge watched the entire season and it’s amazing! I need more of it:) there’s hardly any shows anymore with one of the main characters portraying a gay character or any LGBT representations. We need this.

I really like the show. It has some good qualities. They have some pretty good moral values.

I want a second season! The kid is kind of annoying at first, but I just ignore it. The other characters and the episodes are great!

Horrible not funny show. Mindy Kailing should be embarrassed because her other shows are great!

Loved it . The son can sing looking for more of it . Very cute

Cancel it! Got board with obnoxious kid. Super gay or not, character not likeable.

Acute show I hope it lasts