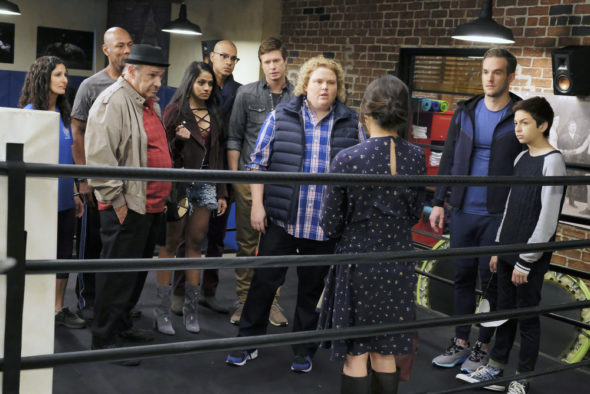 Is the first season of the Champions TV show on NBC a winner or a loser? As we all know, the Nielsen ratings typically play a big role in determining whether a TV show like Champions is cancelled or renewed for season two. Unfortunately, most of us do not live in Nielsen households. Because many viewers feel frustration when their viewing habits and opinions aren’t considered, we’d like to offer you the chance to rate all of the Champions season one episodes. **Status update below.

An NBC sitcom from creators Charlie Grandy and Mindy Kaling, Champions stars Anders Holm, Andy Favreau, J.J. Totah, Fortune Feimster, Ginger Gonzaga, Mouzam Makkar, Yassir Lester, and Robert Costanzo, with Kaling guest starring. The comedy centers on Vince (Holm), a former high school baseball star who abandoned his aspirations to run his family’s Brooklyn gym and lives above it with his sweet, naïve younger brother, Matthew (Favreau). When Vince’s old fling, Priya (Kaling) drops off their teenaged son, Michael (Totah), so the boy can attend a New York school for the performing arts, Vince and Matthew must rise to the challenge of providing a good home for the young man, despite their utter lack of parenting experience. Fortunately, the gang at the gym is ready to provide some guidance, whether it’s helpful or not.

What do you think? Which season one episodes of the Champions TV series do you rate as wonderful, terrible, or somewhere between? Should NBC have cancelled or renewed Champions for a second season? Don’t forget to vote, and share your thoughts, below.

**6/29/2018 Status Update: Champions has been cancelled, there will be no season two. Details here.

I like the show.The fact that anyone can watch it even if they haven’t seen the previous episodes.Moreover it’s funny as well but can make it more humorous .

Just stumble on the show by accident and have tuned in every week since. NBC has a great show on thier hands. This is one that will grow ints audiance, like Cheers, Sienfeld-

I simply LOVE JJ Totah. He is so talented. I adore him!!!

Watched until first commercial break. Hard to believe this **** was ever allowed on the air. One sad cliche after another. Someone should be fired!

OK please explain why you have to put profanity and insulting Show?. we like to know . Is it because there’s a gay person in it? If it is that shouldn’t be the reason this is a cute heartwarming show whichlacks in today’s programming

I didn’t see any mention of homosexuality in his comment. Actually, he clearly stated it was the “sad cliches” he did not like about the show. He could have expressed his opinion without the profanity, but that’s his choice of expression and obviously the site blocked it and allowed the rest of his post, so no harm done. I don’t see why he has to explain anything further, he has a right not like the show and convey it as he did. I also did not like the show as a whole (characters, plots, etc) and barely got through the… Read more »

Horrible is still horrible..probably have a .01 Ratings by May

Mindy Kaling should be embarrassed this show is soooo bad!