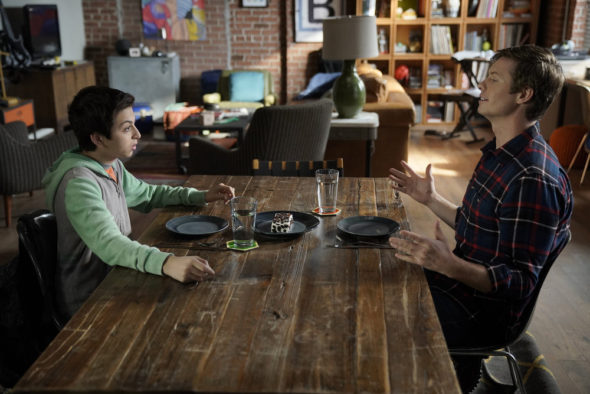 Have we got a winner? Has the Champions TV show been cancelled or renewed for a second season on NBC? The television vulture is watching all the latest cancellation and renewal news, so this page is the place to track the status of Champions, season two. Bookmark it, or subscribe for the latest updates. Remember, the television vulture is watching your shows. Are you?

An NBC sitcom from creators Charlie Grandy and Mindy Kaling, Champions stars Anders Holm, Andy Favreau, J.J. Totah, Fortune Feimster, Ginger Gonzaga, Mouzam Makkar, Yassir Lester, and Robert Costanzo, with Kaling guest starring. The comedy centers on Vince (Holm), a former high school baseball star who abandoned his aspirations to run his family’s Brooklyn gym and lives above it with his sweet, naïve younger brother, Matthew (Favreau). When Vince’s old fling, Priya (Kaling) drops off their teenaged son, Michael (Totah), so the boy can attend a New York school for the performing arts, Vince and Matthew must rise to the challenge of providing a good home for the young man, despite their utter lack of parenting experience. Fortunately, the gang at the gym is ready to provide some guidance, whether it’s helpful or not.

The first season of Champions averaged a 0.47 rating in the 18-49 demographic and 1.92 million viewers. Find out how Champions stacks up against other NBC TV shows.

Will NBC cancel or renew Champions for season two? The ratings have been quite low so I’m certain that this sitcom will be cancelled after one season. Could a miracle save this family comedy? I’ll keep a hungry on the ratings and update this page with breaking news. Subscribe for Champions cancellation or renewal alerts.

6/29/2018 Status Update: Champions has been cancelled, there will be no season two. Details here.

What do you think? Did you hope Champions will be renewed for season two? How do you feel, now that NBC has cancelled this TV show, instead?

Did Netflix pick this show up? I’m from Mexico and all 10 episodes of this show are showing up on my Netflix as a “Netflix Original”.

Please allow a better show to get the time slot. This was horrible. J.J. Totah has some talent but he needs to be more natural and not appear to be so pretentious all the time. Obnoxious even.