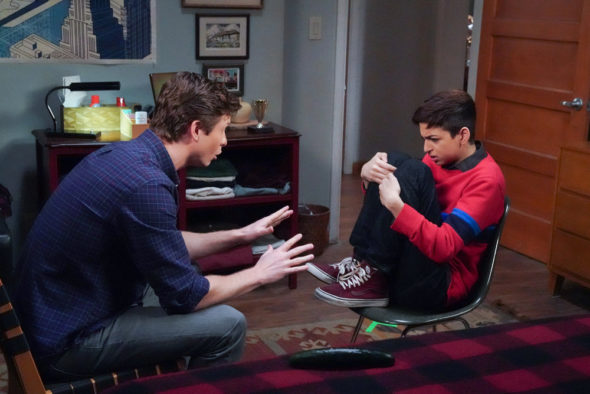 Snatching defeat from the jaws of victory, NBC has cancelled its Champions TV show after one season. The low-rated comedy, from creators Charlie Grandy and Mindy Kaling, premiered on March 8, 2018 and never quite lived up to its name in the Nielsen ratings race. Reportedly, the cast options will expire, so any hope for a second season elsewhere, would mean making new deals with the players.

An NBC sitcom, Champions stars Anders Holm, Andy Favreau, J.J. Totah, Fortune Feimster, Ginger Gonzaga, Mouzam Makkar, Yassir Lester, and Robert Costanzo, with Kaling guest starring. The comedy centers on Vince (Holm), a former high school baseball star who abandoned his aspirations to run his family’s Brooklyn gym with his younger brother, Matthew (Favreau). When Vince’s old fling, Priya (Kaling) drops off their teenaged son, Michael (Totah), so the boy can attend a New York school for the performing arts, Vince and Matthew must rise to the challenge of providing him a home, despite their utter lack of parenting experience.

Champions: A Look at the Ratings

The first season of Champions averaged a 0.47 rating in the 18-49 demographic and 1.92 million viewers. By both measures Champions is one of the lowest rated scripted NBC TV shows (to have premiered during the regular season) so the cancellation makes sense.

The call came down to the wire, with the options on the cast expiring this weekend. I hear there had been discussions with Netflix about picking up the series.

The streaming giant has international rights to Champions. I’d heard that the Netflix pact stemmed from the close relationship between Champions co-creator/co-star Mindy Kaling and Netflix’s Bela Bajaria, who shepherded Kaling’s The Mindy Project at Universal TV, and that the international rights deal helped seal Champions‘ series order in May 2017.

Netflix will continue to carry the show internationally — it debuted on the streaming platform June 12 — but I hear the Internet network has opted not to pick up Champions for next season. There are still discussions about the show’s future elsewhere though I hear the options on the cast are not being extended, so if a new home is found, new deals with the actors have to be made.

What do you think? Are you a fan of the Champions TV series? Should NBC have cancelled or renewed this TV show for a second season?

I’m highly upset that they cancelled this show. I swear, everytime I get hooked on a show & I’m ready to binge I get disappointed that the show is cancelled & I can’t even see what happens next. Champions is a great show & if NBC did not want the show Netflix should definitely have picked it up. It’s the least they can do since cancelling One Day at a Time. Luckily a TV network picked that up to continue! There are so many crap shows on that should be cancelled & Champions was not one of them. They need… Read more »

I am so sad that this show did not get picked up for a second season & I’m mad that Netflix hasn’t given them a second season. This is a great show with such funny actors, I’ve binged watched the entire season of this show 3 times already since it aired on Netflix. This show is was able to touch on many issues including racism, ageism,White privilege etc…in such a light hearted funny way. Please bring a season 2,3,4,5 etc…

This show should’ve been renewed. It was a great show and I am so bummed to find out it’s been cancelled.

This show is a landmark. nothing wrong but people own person basis about groups of people.

I actually think we need shows like this. Simple, well structured and with a good moral undertone. It made me laugh and I really rate Anders Holm. Not every show needs to be a ratings smash, sometimes the quirky cult shows are a refreshing change to us non Game of Thrones type viewers and, they usually need time to grow. Also, I reckon the budget for this is fairly low in comparison to a lot of shows out there which are usually crud and get crazy money thrown at them. Shame all round that’s its been cancelled and shame Netflix… Read more »

Well at least NBC made the right call. There were deep cable show reruns that had better ratings than this mess. It wasn’t a fun show. I know of two people that the moment but they realized it was on they changed the channel. No, no one is going to pick up this show. It will be forgotten by all but a handful of people in a couple months. And the ones that remember it will only do so when finger nails are scratched across a chalkboard. People always think there is hope for their nail gratting favorites. Except after… Read more »

I just binged watched this on Netflix and am very disappointed that there is only one season!

Never heard of it

Dang I get downvotes just because I didn’t know what this was, lol?

Really really messed up here. There’s no reason not to make a second season is this was worth watching. Oh well so much for what time people really wanna watching letting out marks one on instead.

Omg why? It was good and they cancelled? I had enough oh this.

I really like Champions, it has the right text to it. Netflix should be renewed for season 2 next year. Maybe another network will pick it up for Season 2 somepoint if NBC decides to pass on the series.

Anders I hope you saved your Workaholics money.