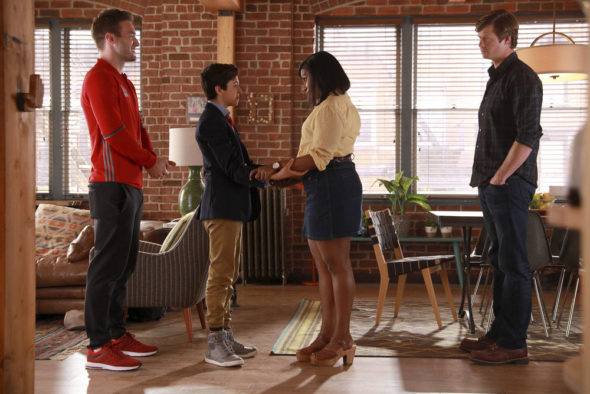 TV show description:
From creators Charlie Grandy and Mindy Kaling, the Champions TV show is a single-camera sitcom. The series centers on Vince (Holm), a former high school baseball star who abandoned his aspirations to run his family’s Brooklyn gym.

Secretly, Vince has been making arrangements to sell the business and take off for Florida. When his old fling, Priya (Kaling) shows up with their 15-year-old son, Michael (Totah), it upends all his plans.

Priya, who has been raising Michael alone since his birth, feels the time is right to move her talented theater kid from Cleveland to New York City, to attend a prominent school for the performing arts. Although she dotes on her son, Priya is happy to let Matthew assume responsibility, while their boy pursues his calling.

Vince and his younger brother, Matthew (Favreau), live together above the gym. A sweet, if naïve man, Matthew is thrilled to welcome his nephew into his life and make a home for him.

Although he’s Michael’s father, the uncompromising Vince finds he has little in common with his artistic kid. While Matthew is inclined to hover over their new charge, Vince realizes he has to learn how to be a father on a day-to-day basis. Meanwhile, Michael has to learn how to make new friends, now that he is but a small fish in a great, big pond.

Their circle is mostly made up of people from the gym. Vince and Matthew’s longtime friend, Ruby (Feimster) isn’t averse to taking advantage of their relationship, but is there for them when it counts.

A yoga instructor and fledgling business woman, Britney (Makkar) will sometimes stop building her brand on Instagram, in order to offer her advice. Then there’s their spin instructor, Shabaz (Lester), who subjects co-workers and customers into seeing his pitiful plays.

Their accountant, Dana (Gonzaga) is always struggling to keep the gym in business. Rounding out their gang at the gym is Uncle Bud (Costanzo), a lovable boxing instructor who can’t quite keep up with the times.

Series Finale:
Episode #10, “Deal or No Deal”
Michael prepares for his first date as Vince and Matthew prepare to expand the gym. But an unexpected offer threatens to change all their lives forever.
First aired: May 25, 2018

What do you think? Did you like the Champions TV series? Should this TV show have been cancelled or renewed season two on NBC?

I enjoyed this show. The young boy is great and funny! I think we need more shows that represent gay teens as regular characters, more understanding and acceptance is needed. Adolescents have so many pressures these days, bullying, cyber bullying, school shootings, etc.. This was a funny show with good characters. It just needed more time for people see it. I hope Netflix does picks it up.

Love this show please keep it , it is such a refreshing comedy , I am currently catching up on every episode

This show needs to be renewed !!! Very FUNNY!!!

LOL FRED I googled looking for others who thought this show was bad and glad I’m not the only one. It was TERRIBLE.

iamlight, LOL, I also googled for the same reason. Fred, thank you for expressing my sentiment.

Why are people so dumb found hitting the show? Yes some good qualities And some morals which makes it a little programming these days.

What a piece of S–T.