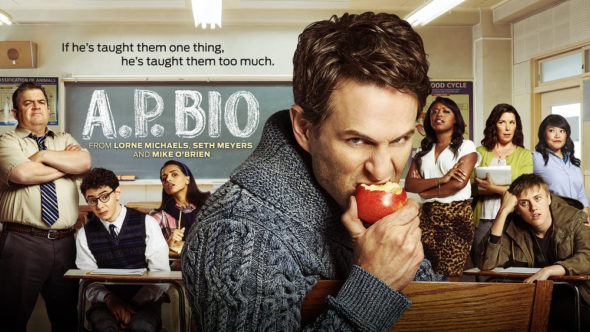 Not counting its Will & Grace revival, the AP Bio TV show is the new first sitcom NBC has introduced during this television season. It comes from Lorne Michaels’ Broadway Video, and Seth Meyers is among those who executive produce with creator Mike O’Brien, so it’s met the prerequisites, but can it make the grade? Will AP Bio be cancelled or renewed for season two? Stay tuned.


What do you think? Do you like the AP Bio TV series? Did you think NBC would cancel or renew it for season two?

I really dislike this show. It’s not funny, just tragic watching a teacher abuse his students.

I love this show and think it deserves another semester. Xo!

they should really change the time slot of this show. it’s too good to cancel after 1 season.

I love this show. I think it is hilarious. The time slot needs to change to 9:00 pm as it competes with Supernatural.