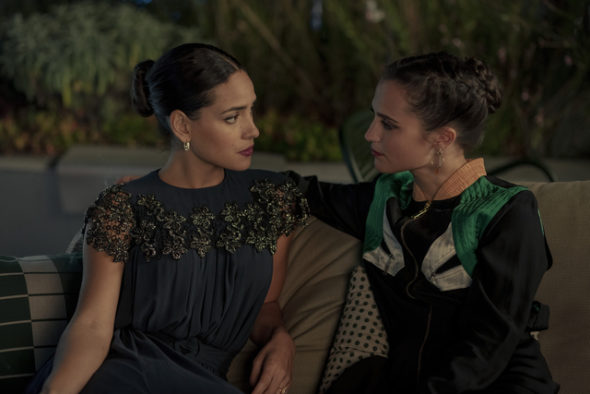 Will eight episodes be enough to bring the Irma Vep TV show to a satisfying end? As we all know, the Nielsen ratings typically play a big role in determining whether a TV show like Irma Vep is cancelled or renewed for season two (this appears to be a true close-ended mini-series). Unfortunately, most of us do not live in Nielsen households. Because many viewers feel frustrated when their viewing habits and opinions aren’t considered, we invite you to rate all of the first season episodes of Irma Vep here.

An HBO thriller drama series written and directed by Olivier Assayas, the Irma Vep TV show stars Alicia Vikander, Adria Arjona, Carrie Brownstein, Tom Sturridge, Fala Chen, Devon Ross, Byron Bowers, and Vincent Macaigne. The story follows Mira (Vikander), an American movie star who’s disillusioned by her career and a recent breakup. She comes to France to star as “Irma Vep” in a remake of the French silent film classic, Les Vampires. Set against the backdrop of a lurid crime thriller, Mira struggles as the distinctions between herself and the character she plays begin to blur and merge. The story reveals the uncertain ground that lies at the border of fiction and reality, artifice and authenticity, art and life.

What do you think? Which season one episodes of the Irma Vep TV series do you rate as wonderful, terrible, or somewhere between? Do you think that Irma Vep should continue for a second season on HBO or, is one season the right length? Don’t forget to vote, and share your thoughts, below.