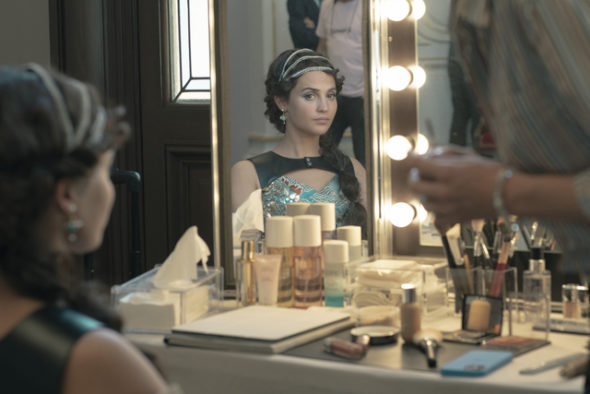 Could there be more than one season of story to tell? Has the Irma Vep TV show been cancelled or renewed for a second season on HBO? The television vulture is watching all the latest cancellation and renewal news, so this page is the place to track the status of Irma Vep, season two. Bookmark it, or subscribe for the latest updates. Remember, the television vulture is watching your shows. Are you?

Airing on the HBO cable channel, the Irma Vep TV show stars Alicia Vikander, Adria Arjona, Carrie Brownstein, Tom Sturridge, Fala Chen, Devon Ross, Byron Bowers, and Vincent Macaigne. The story follows Mira (Vikander), an American movie star who’s disillusioned by her career and a recent breakup. She comes to France to star as “Irma Vep” in a remake of the French silent film classic, Les Vampires. Set against the backdrop of a lurid crime thriller, Mira struggles as the distinctions between herself and the character she plays begin to blur and merge. The story reveals the uncertain ground that lies at the border of fiction and reality, artifice and authenticity, art and life.

The first season of Irma Vep averages a 0.01 rating in the 18-49 demographic and 52,000 viewers in the live+same day ratings (including DVR playback through 3:00 AM). While these numbers don’t include further delayed or streaming viewing, they are a very good indicator of how a show is performing, especially when compared to others on the same channel. There can be other economic factors involved in a show’s fate, but typically the higher-rated series are renewed and the lower-rated ones are cancelled. Find out how Irma Vep stacks up against other HBO TV shows.

It appears that Irma Vep is a close-ended mini-series so a second season is unlikely to happen, especially since the ratings are quite low. I’ll update this page with breaking developments. Subscribe for free alerts on Irma Vep cancellation or renewal news.

What do you think? Are you satisfied with the Irma Vep TV show ending after eight episodes or, would you like to see a second season of this series on HBO?