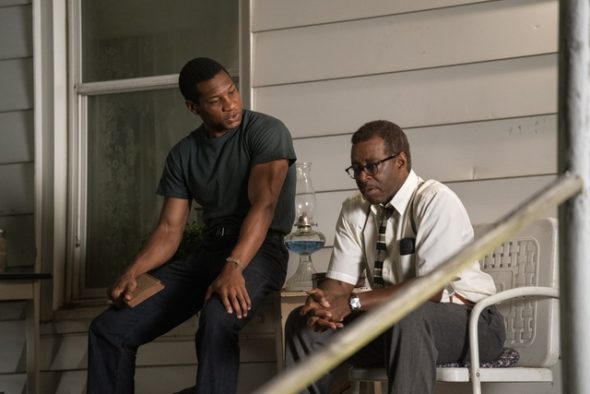 Can this trio survive this trip? Has the Lovecraft Country TV show been cancelled or renewed for a second season on HBO? The television vulture is watching all the latest cancellation and renewal news, so this page is the place to track the status of Lovecraft Country, season two. Bookmark it, or subscribe for the latest updates. Remember, the television vulture is watching your shows. Are you?

Airing on the HBO cable channel, the Lovecraft TV show is based on the novel of the same name by Matt Ruff. The series stars Jurnee Smollett, Jonathan Majors, Aunjanue Ellis, Abbey Lee, Jada Harris, Wunmi Mosaku, and Michael Kenneth Williams with Courtney B. Vance, Jamie Chung, Jamie Neumann, Jordan Patrick Smith, and Tony Goldwyn in recurring roles. Set in the 1950s, the story follows Atticus “Tic” Freeman (Majors) as he journeys with his childhood friend Letitia (Smollett) and his uncle George (Vance). They’re on a road trip, looking for Atticus’ missing father, Montrose (Williams). The trio’s search-and-rescue turns into a struggle to survive as they try to overcome both the racist terrors of white America and monstrous creatures that could be ripped from a horror paperback by H.P. Lovecraft.

Will HBO cancel or renew Lovecraft Country for season two? This initially felt like a mini-series but clearly, there’s more story that can be told. I think that it will be renewed. I’ll update this page with breaking developments. Subscribe for free alerts on Lovecraft Country cancellation or renewal news.

7/3/21 update: Lovecraft Country has been cancelled on HBO.

What do you think? Were you hoping that the Lovecraft Country TV show would be renewed for a second season on HBO or, is one season enough?

I hope that there will be another season of lovecarft, and i like it on the hbo channel, commercials are a bit annoying and I’m not sure why the other person wants this on the cw channel and i also think with all the commercials it cuts out half of whatever show people are watching so i rather that they keep on the hbo channel!

I hope there is a season two. I love Lovecraft country I watch it religiously you could say reruns of every episode. Please please please have a season 2 3 4 5 etc. Anyone who doesn’t like the show is just cleanly doesn’t have any taste. The show has it all

Lovecraft country needs to be on the CW or Fox. More people need to get a chance to see this amazing show. Can’t wait for season 2

I truly hope this show is renewed!!! Facebook has at least 12 groups that admire this show! I have watched each episode 10x! It’s relatable for me! Outstanding cast!!!! Please renew this show

I hope they cancel it so something better can take it’s place. I watch purely out of pity for Peele at this point.

After the LOST debacle you realize they should have made one, maybe two seasons. For the love of all that is good please don’t let Damon Lindeloff take this one down to be another “Lost”. Lovecraft is EXCELLENT – let it stay that way. If you do more seasons, it’ll be watered down.

This series is too excellent for only one season. The special effects are mesmerizing, and all the characters are deep and well written. It’s sci-fi, it’s a love story, it’s a history lesson, it’s Harry Potter magic. Keep it going!

Love this show amazing episodes. Really hope they renew. It would ve ashamed if they didnt

This show is so perfect. Every episode gets better than the previous on. I can’t wait to see what’s coming next. Love this magic!!!

Love craft country is a great series i hope it continues great actors and actress especially Tic and Leti keep it going!!!!÷