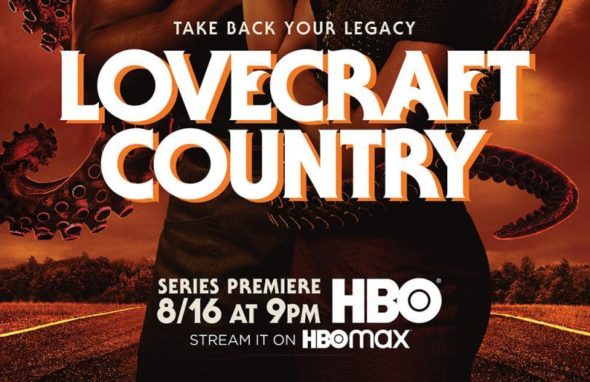 The Lovecraft Country TV series is based on the novel of the same name by Matt Ruff. Since it’s based on a book, it seems like the show will have a natural conclusion by the end of the 10 episodes. But, if there’s enough interest, could Lovecraft Country end up being renewed for a second season anyway? Stay tuned. *Status update below.

A horror drama series, the Lovecraft TV show stars Jurnee Smollett, Jonathan Majors, Aunjanue Ellis, Abbey Lee, Jada Harris, Wunmi Mosaku, and Michael Kenneth Williams with Courtney B. Vance, Jamie Chung, Jamie Neumann, Jordan Patrick Smith, and Tony Goldwyn in recurring roles. Set in the 1950s, the story follows Atticus “Tic” Freeman (Majors) as he journeys with his childhood friend Letitia (Smollett) and his uncle George (Vance). They’re on a road trip, looking for Atticus’ missing father, Montrose (Williams). The trio’s search-and-rescue turns into a struggle to survive as they try to overcome both the racist terrors of white America and monstrous creatures that could be ripped from a horror paperback by H.P. Lovecraft.

What do you think? Do you like the Lovecraft Country TV series on HBO? Should it be renewed for a second season?

*7/3/21 update: Lovecraft Country has been cancelled on HBO.

Please renew, its the best thing on TV today.

Yes loved it! Please renew it , each episode kept getting better and better. Hbo please renew Lovecraft County. Haven’t been in love with with magical showsince true blood

Yes. I am extremely impressed with this show and would love for it to continue with a season 2. I am not sure why the demographics ratings data is for age group 18-49, but I am 64 and a dozen friends and family members, all over age 49, love this show too.

I love, love, love Lovecraft Country. I hope there will be a second season!

It is already hemorrhaging viewers overall and in the key 18-49 demographic according to this site. Won’t make it for a second season if this trend keeps up.

I love the show. It’s so well done and suspenseful.

So glad its gone. Terrible show, with a meanspirted negative view of our history.