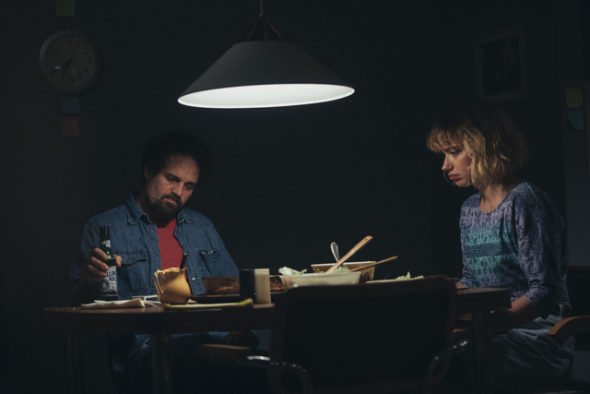 Can Dominick help Thomas? Has the I Know This Much Is True TV show been cancelled? Renewed for a second season on HBO? The television vulture is watching all the latest cancellation and renewal news, so this page is the place to track the status of I Know This Much Is True. Bookmark it, or subscribe for the latest updates. Remember, the television vulture is watching your shows. Are you?

Airing on the HBO cable channel, I Know This Much Is True stars Mark Ruffalo, Melissa Leo, Rosie O’Donnell, Archie Panjabi, Imogen Poots, John Procaccino, Rob Huebel, Philip Ettinger, Aisling Franciosi, Michael Greyeyes, Guillermo Diaz, Marcello Fonte, Bruce Greenwood, Brian Goodman, with Juliette Lewis and Kathryn Hahn. The story revolves around identical twin brothers Dominick and Thomas Birdsey. It’s a family saga that follows their parallel lives in a story of betrayal, sacrifice, and forgiveness. After paranoid schizophrenic Thomas Birdsey (Ruffalo) has a violent public breakdown, his identical twin brother, Dominick (Ruffalo) finds himself stepping up to defend him in unexpected ways. As he navigates the fallout of Thomas’ actions, Dominick reflects on their childhood growing up under the tyrannical rule of their volatile step-father, Ray (Procaccino), and their persistent desire to know the identity of their biological father.

I don’t think we have to wonder if HBO will cancel or renew I Know This Much Is True for season two. It appears that this is a close-ended mini-series so unless HBO wants to continue the story somehow (ala Big Little Lies), episode six will be the end. I’ll update this page with breaking developments. Subscribe for free alerts on I Know This Much Is True cancellation or renewal news.

I Know This Much Is True Cancellation & Renewal Related Links

What do you think? Do you hope the I Know This Much Is True TV show will be renewed for a second season on HBO somehow?

Well it’s a dam tragedy if they don’t as this is one of the best series’s AV watched in a decade. It’s cruel of them if they don’t make a season 2 unforgettable no logical reasoning behind not making it. Brilliant cast epic program .