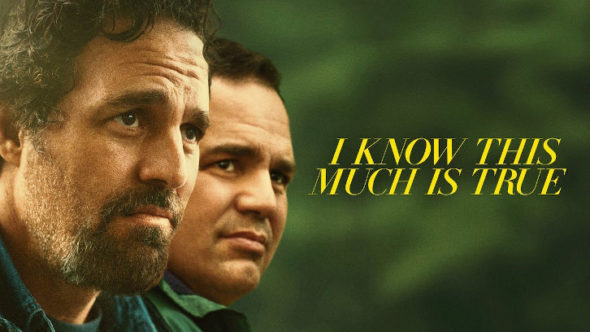 TV show description:
Based on the novel by Wally Lamb, I Know This Much Is True is a drama series that revolves around identical twin brothers Dominick and Thomas Birdsey. It’s a family saga that follows their parallel lives in a story of betrayal, sacrifice, and forgiveness.

After paranoid schizophrenic Thomas Birdsey (Ruffalo) has a violent public breakdown, his identical twin brother, Dominick (Ruffalo) finds himself stepping up to defend him in unexpected ways.

As he navigates the fallout of Thomas’ actions, Dominick reflects on their childhood growing up under the tyrannical rule of their volatile step-father, Ray (Procaccino), and their persistent desire to know the identity of their biological father.

Dominick crosses paths with the prickly Nedra Frank (Lewis) as he attempts to have his grandfather’s manuscript translated from Italian into English as a gift for his ailing mother.

Series Finale:
Episode #6
A lifetime of animosity between Dominick and Ray spills over in public at an inopportune time; after an unexpected tragedy, Dominick seeks reconciliation with those he has hurt; Dominick gets answers.
First aired: June 14, 2020.

What do you think? Do you like the I Know This Much Is True TV show? Do you think it should have been renewed for a second season?