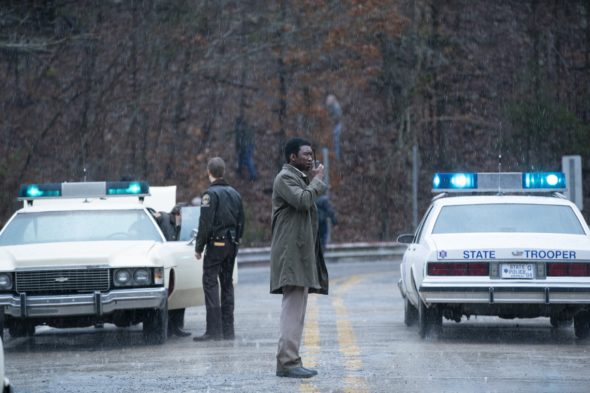 Let’s examine the evidence. Has the True Detective TV show been cancelled or renewed for a fourth season on HBO? The television vulture is watching all the latest cancellation and renewal news, so this page is the place to track the status of True Detective season four. Bookmark it, or subscribe for the latest updates. Remember, the television vulture is watching your shows. Are you?

The third season of True Detective is averaging a 0.36 rating in the 18-49 demographic and 1.25 million viewers. Compared to season two, that’s down by 69% and 52%, respectively. Learn how True Detective stacks up against the other HBO TV shows.

Will HBO cancel or renew True Detective for season four? The ratings are way down but still very good for an HBO series so, right now, I’m thinking it will be renewed.  I’ll keep a hungry eye on the Nielsens and update this page with breaking developments. Subscribe for free True Detective cancellation or renewal alerts.

What do you think? Do you hope the True Detective TV show will be renewed for a fourth season? How would you feel if HBO cancelled this TV series, instead?

I think you did a great series and very interesting cases shows reality-based crimes.
I will love to see this Detective series stay the best one was the first year.
Hopefully will be a season 4

I consider the 3rd season, the best! I hope HBO and the producers agree on bringing us a 4th season…

Pretty, pretty please renew True Detective! I am in love and I know many more who are too. I can only watch the same three seasons over so many times. Many people would be more than happy to have True Detective return for season 4.

Emphatic yes! Please renew for a Season 4 of True Detective – one of the best shows ever!