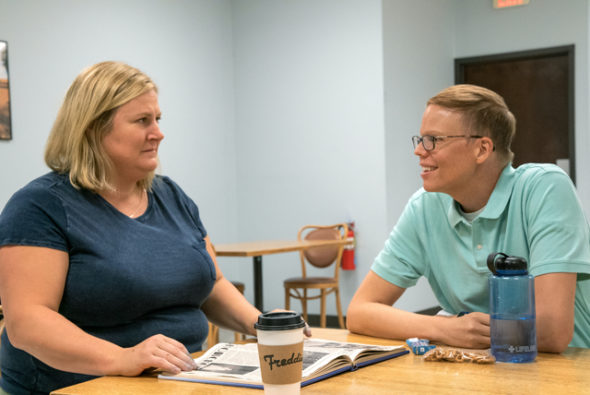 Can Sam find her true home? Has the Somebody Somewhere TV show been cancelled or renewed for a second season on HBO? The television vulture is watching all the latest cancellation and renewal news, so this page is the place to track the status of Somebody Somewhere, season two. Bookmark it, or subscribe for the latest updates. Remember, the television vulture is watching your shows. Are you?

Airing on the HBO cable channel, the Somebody Somewhere TV show stars Bridget Everett, Jeff Hiller, Mary Catherine Garrison, Danny McCarthy, and Mike Hagerty with Murray Hill, Jon Hudson Odom, Heidi Johanningmeier, and Jane Brody in recurring roles. The story follows Sam (Everett), a true Kansan who struggles to fit the hometown mold. Grappling with loss and acceptance, Sam’s saving grace is singing and it leads her on a journey to discover herself and a community of outsiders who don’t fit in but don’t give up. Other characters include her co-worker, Joel (Hiller); Sam’s resentful and scrappy sister, Tricia (Garrison); unremarkable brother-in-law, Rick (McCarthy); and stoic family patriarch Ed (Hagerty).

The first season of Somebody Somewhere averaged a 0.02 rating in the 18-49 demographic and 130,000 viewers in the live+same day ratings (including DVR playback through 3:00 AM). While these numbers don’t include further delayed or streaming viewing, they are a very good indicator of how a show is performing, especially when compared to others on the same channel. There can be other economic factors involved in a show’s fate, but typically the higher-rated series are renewed and the lower-rated ones are cancelled. Find out how Somebody Somewhere stacks up against other HBO TV shows.

Will HBO cancel or renew Somebody Somewhere for season two? The traditional ratings are quite low but the show seems relatively inexpensive to produce and reviews have been very positive. I suspect that enough HBO subscribers will find it via delayed viewing or streaming and it will be renewed. I’ll update this page with breaking developments. Subscribe for free alerts on Somebody Somewhere cancellation or renewal news.

2/3/22 update: Somebody Somewhere has been renewed for a second season on HBO.

What do you think? Are you glad that the Somebody Somewhere TV show has been renewed for a second season? How would you feel if HBO had cancelled this TV series, instead?