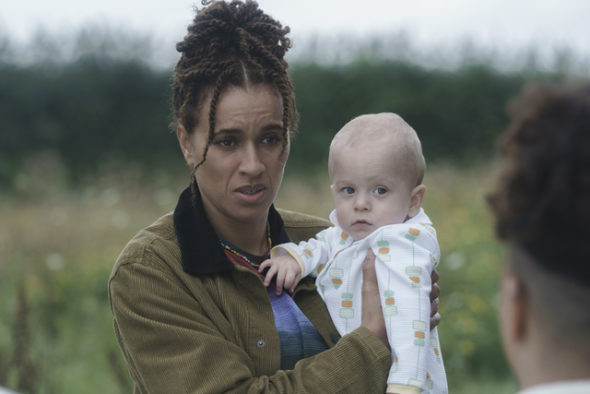 Could this child become a toddler? Has The Baby TV show been cancelled or renewed for a second season on HBO? The television vulture is watching all the latest cancellation and renewal news, so this page is the place to track the status of The Baby, season two. Bookmark it, or subscribe for the latest updates. Remember, the television vulture is watching your shows. Are you?

Airing on the HBO cable channel, The Baby TV show stars Michelle De Swarte, Amira Ghazalla, Amber Grappy, Patrice Naiambana, Sinéad Cusack, Shvorne Marks, Isy Suttie, Tanya Reynolds, Seyan Sarvan, Karl Davies, and Divian Ladwa. The story follows 38-year-old Natasha (De Swarte), a woman who is furious that her closest friends are all having babies. When she unexpectedly ends up with a baby of her own, her life dramatically implodes. Controlling, manipulative, but incredibly cute, the baby twists Natasha’s life into a surreal horror show. As she discovers the true extent of the baby’s deadly nature, Natasha makes desperate attempts to get rid of it. She doesn’t want a baby. Unfortunately, the baby wants her.

The first season of The Baby averaged a 0.02 rating in the 18-49 demographic and 117,000 viewers in the live+same day ratings (including DVR playback through 3:00 AM). While these numbers don’t include further delayed or streaming viewing, they are a very good indicator of how a show is performing, especially when compared to others on the same channel. There can be other economic factors involved in a show’s fate, but typically the higher-rated series are renewed and the lower-rated ones are cancelled. Find out how The Baby stacks up against other HBO TV shows.

Will HBO cancel or renew The Baby for season two? This appears to be a close-ended series so, I expect the eighth episode to be the end. So-called limited series have been renewed in the past but this show’s ratings are pretty small so I don’t see that happening. I’ll update this page with breaking developments. Subscribe for free alerts on The Baby cancellation or renewal news.

What do you think? Do you hope that The Baby TV show will be renewed for a second season on HBO?

Please bring a second series of The Baby

I think this show has a very original idea. I hope they renew it 🙁

Best series I’ve watched for ages. Please let there be a follow up

I thought The Baby was a new take on Omen, and such like movies/tv shows. I really liked the softer touch. Meaning they strove to have the audience want this little evil baby to get the love and attention he deserved in the first place. I would LOVE to see a season 2! Its definitely a genre that doesn’t seem to be huge with todays audience, but the small niche its found seems to love it…like I do.

I loved this show, it was just so engagingly odd which was part of its charm.