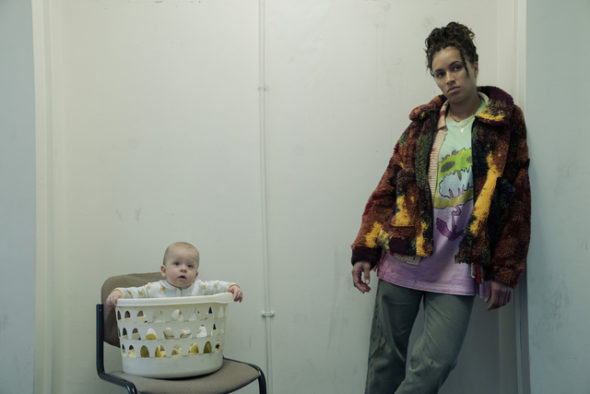 TV show description:
A British horror-comedy series, The Baby TV show was created by Siân Robins-Grace and Lucy Gaymer. It presents a darkly funny, raw examination of motherhood, from the perspective of a woman who doesn’t want to be one.

The story follows 38-year-old Natasha (De Swarte), a woman who is furious that her closest friends are all having babies. When she unexpectedly ends up with a baby of her own, her life dramatically implodes.

Controlling, manipulative, but incredibly cute, the baby twists Natasha’s life into a surreal horror show. As she discovers the true extent of the baby’s deadly nature, Natasha makes increasingly desperate attempts to get rid of it. She doesn’t want a baby. Unfortunately, the baby definitely wants her.

Other characters include Mrs. Eaves (Ghazalla), the 70-year-old enigma who has spent the last fifty years living out of her car and seems to be everywhere the Baby is; Bobbi (Grappy), Natasha’s younger sister who is also a children’s magician who would love nothing more than to be a parent; and Natasha’s parents, Barbara (Cusack) and Lyle (Naiambana).

Series Finale:
Episode #8 — The Possession
Natasha makes a final decision about the baby amid growing concerns from her father Lyle, Bobbi and Mrs. Eaves, who each set out to help.
First aired: June 12, 2022.

What do you think? Do you like The Baby TV show? Would you watch a second season, with the same characters or new ones?

I truly am impressed with HBO’s new series “The Baby”! I can’t wait for Sunday night’s to see what happens next! PLEASE renew this show. I truly believe that HBO has great hit here & if the writers continue creating the same, dark comedy to keep its viewers on the edge of our seats…I am sure there will be more followers for many seasons to come! Thank you, HBO! “The Baby” is a cool keeper! So are ALL of the actors. Keep them as they are. Natasha (Michelle De Swarte) rocks! And Mrs Eaves (Amira Ghazalla) is always highly entertaining… Read more »

The Baby is oddly mesmerizing! I wasn’t sure what to expect and I’m riveted. I watch each episode twice because I don’t want to miss anything. I am hooked – I have no idea what will happen next.
A second season would be amazing!

Love this series. Would definitely watch a second season

I think we need to have a second season!! I think this is a great series, and deserves a season 2. I give The Baby a 10 rating!! I look forward to watching this every Sunday night, and we are just getting to the crux of what’s really going on here, with this Baby!! DON’T reel me in, and leave us hanging with this series!!