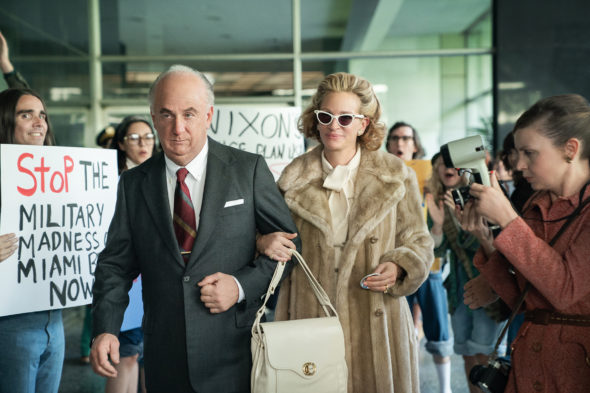 TV show description:
A drama series based on the Watergate scandal, the Gaslit TV show is based on the Slow Burn podcast by Leon Neyfakh.

The story is told through the lens of the lesser-known but still key players involved in the downfall of America’s 37th president. They include Richard Nixon’s subordinates, the zealots aiding and abetting their crimes, and the whistleblowers who would eventually bring the whole enterprise crashing to the ground.

During Nixon’s reelection campaign, Martha enjoys frequent guest appearances on news and variety shows and graces the covers of the nation’s most prominent magazines. Her frequent, unfiltered, and impulsive airing of personal views earns her the colloquial title “The Mouth of the South.” When the Watergate break-in happens, her story takes a turn, and the choices she makes in its wake will come to put her reputation on the line and her marriage under threat.

John Mitchell is one of Nixon’s most trusted advisors and is also hopelessly in love with his famously outspoken wife. After Watergate, Mitchell realizes that Martha knows the secret behind the break-in and suspects she may be willing to tell her side of the story to the press, forcing him to choose between Martha and the President and throwing their personal life into chaos as his professional life unravels.

Series Finale:
Episode #8 — Final Days
In the final days of the Nixon administration, Martha struggles to keep her family together in the midst of her decline. Dean and Mo ready for their own future as G. Gordon Liddy gives Dean a parting gift.
First aired: June 12, 2022.

What do you think? Do you like the Gaslit TV show? Do you think it should have been renewed for another season with a different story?