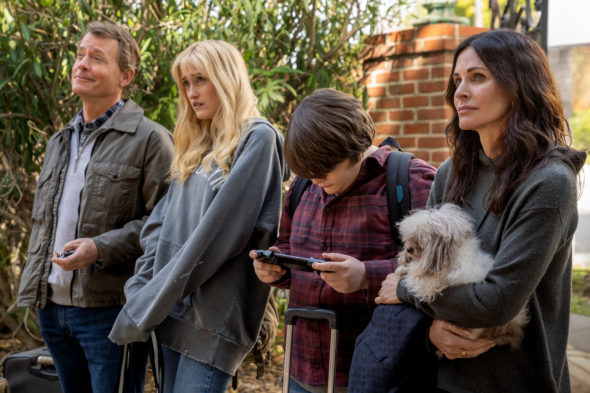 Is this family in over their heads in the first season of the Shining Vale TV show on Starz? As we all know, the Nielsen ratings typically play a big role in determining whether a TV show like Shining Vale is cancelled or renewed for season two. Unfortunately, most of us do not live in Nielsen households. Because many viewers feel frustrated when their viewing habits and opinions aren’t considered, we invite you to rate all of the first season episodes of Shining Vale here. Status Update Below.

A Starz horror-comedy series, the Shining Vale TV show stars Courteney Cox, Greg Kinnear, Gus Birney, Merrin Dungey, Dylan Gage, and Mira Sorvino. The story begins as a dysfunctional family moves from the city to a small town, into a house where terrible atrocities have taken place. Wife and mother Patricia “Pat” Phelps (Cox) is a former “wild child” who rose to fame by writing a raunchy, drug-and-alcohol-soaked women’s empowerment novel 17 years ago. Pat is now clean and sober but totally unfulfilled. She still hasn’t written her second novel and can’t remember the last time she had sex with her ever-optimistic husband, Terry (Kinnear). Her teenage kids, Gaynor (Birney) and Jake (Gageare), are at that stage where they don’t want their mother in their lives. Pat is convinced she’s either depressed or possessed. It turns out that the symptoms are exactly the same. Everyone has their demons, but for Pat Phelps, they may be real.

What do you think? Which season one episodes of the Shining Vale TV series do you rate as wonderful, terrible, or somewhere between? Do you think that Shining Vale should be cancelled or renewed for a second season on Starz? Don’t forget to vote, and share your thoughts, below.

Not well done . Not funny or scary . Violent & disjointed . PASS

Great series and great cast! Must be renewed !!

Laughing and at the same time scared somewhat. Gre

Love this show shiny vail! Funny and scary and thrilling. Keeps Laughing and at the same time scared somewhat. Great topics she says everything that I would’ve wanted to say but hold it in. Especially love the kids so true to life. And the hi school scenes chastity club, boyfriend. Sorry to see his mom die 🙁 But I think she’s coming back. Can’t wait to see more seasons I think I’m done with him all sadly. One more Chapter 8 this weekend. Can’t wait to see more episodes!⭐️⭐️⭐️⭐️⭐️⭐️⭐️⭐️⭐️

Last edited 1 month ago by Laughing and at the same time scared somewhat. Gre
0
0
Reply