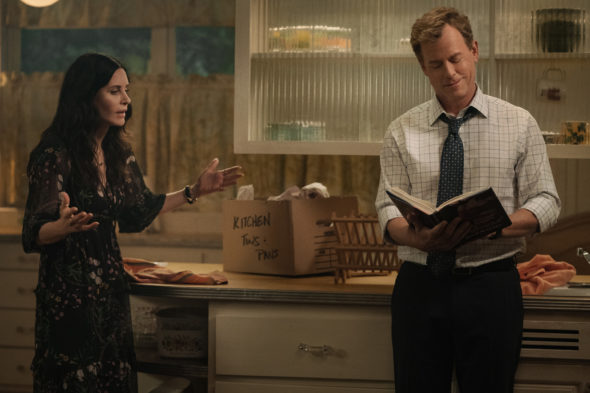 Is being possessed good for one’s creativity? Has the Shining Vale TV show been cancelled or renewed for a second season on Starz? The television vulture is watching all the latest cancellation and renewal news, so this page is the place to track the status of Shining Vale, season two. Bookmark it, or subscribe for the latest updates. Remember, the television vulture is watching your shows. Are you?

Airing on the Starz cable channel, the Shining Vale TV show stars Courteney Cox, Greg Kinnear, Gus Birney, Merrin Dungey, Dylan Gage, and Mira Sorvino. The story begins as a dysfunctional family moves from the city to a small town, into a house where terrible atrocities have taken place. Wife and mother Patricia “Pat” Phelps (Cox) is a former “wild child” who rose to fame by writing a raunchy, drug-and-alcohol-soaked women’s empowerment novel 17 years ago. Pat is now clean and sober but totally unfulfilled. She still hasn’t written her second novel, can’t remember the last time she had sex with her ever-optimistic husband, Terry (Kinnear), and her teenage kids — Gaynor (Birney) and Jake (Gageare) — are at that stage where they don’t want their mother in their lives. Pat is convinced she’s either depressed or possessed. It turns out that the symptoms are exactly the same. Everyone has their demons, but for Pat Phelps, they may be real.

The first season of Shining Vale averaged a 0.02 rating in the 18-49 demographic and 158,000 viewers in the live+same day ratings (including DVR playback through 3:00 AM). While these numbers don’t include further delayed or streaming viewing, they are a very good indicator of how a show is performing, especially when compared to others on the same channel. There can be other economic factors involved in a show’s fate, but typically the higher-rated series are renewed and the lower-rated ones are cancelled. Find out how Shining Vale stacks up against other Starz TV shows.

Will Starz cancel or renew Shining Vale for season two? The door was left open for another season in the season finale so,  I think it has a good chance of being renewed. That being said, the ratings could have been a lot better. I’ll update this page with breaking developments. Subscribe for free alerts on Shining Vale cancellation or renewal news.

What do you think? Are you glad that the Shining Vale TV show has been renewed for a second season? How would you feel if Starz cancelled this TV series, instead?

I have truly enjoyed the shining vale. It’s nice to kind of get away from every day blah’s and watch something funny and so off beat. I truly hope that starz will have a second season on the shining vale. Looking forward to seeing a 2nd season.

I hope there is a season 2 of shining Vale! I was on the edge of my seat, every episode!

Shining Vale very captivating and well written. It was great to find a Comedy Horror worth watching. Well done !!

I have not seen a better show such as ‘Shining Vale’ in years.Top notch performances,writing,editing & directing.An intelligent comedy horror.
Never seen anything like it before.

I absolutely love this show!! It is so unlike anything I have seen on television . It is a horror story of sorts but with plenty of humor and everyday life injected into it. And the talented actors who bring these colorful characters to life are each perfectly cast snd totally believable! Please Starz – Don’t leave us hanging!! Bring back Shining Vale!!

definitely needs another season , cant wait for season 2 and season 1 isnt even over yet …love it !!

Yes there definitely needs to be a season 2. This a good show