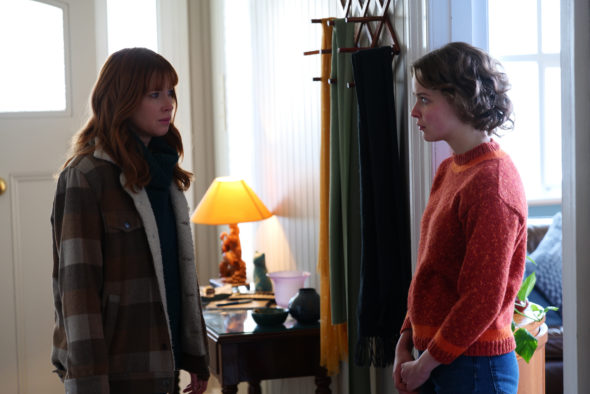 Is there more story to tell? Has The Gloaming TV show been cancelled or renewed for a second season on Starz? The television vulture is watching all the latest cancellation and renewal news, so this page is the place to track the status of The Gloaming, season two. Bookmark it, or subscribe for the latest updates. Remember, the television vulture is watching your shows. Are you?

Originating in Australia and airing on the Starz cable channel in the United States, The Gloaming TV series is set in Tasmania and stars Emma Booth, Ewen Leslie, Martin Henderson, Aaron Pedersen, Rena Owen, Josephine Blazier, and Matt Testro. When a woman is found brutally killed, the clues surrounding her death connect to murders both past and present. Political corruption and shady business dealings are soon entwined with sinister crimes and occult practices. At the center of this web are two detectives, Molly McGee (Booth) and Alex O’Connell (Leslie) who share a tragic past. In a harrowing journey to find the truth, their fate is coerced by the ghosts of the unsettled dead that linger in the liminal space between life and death – known as “The Gloaming”.

The first season of The Gloaming averaged a 0.01 rating in the 18-49 demographic and 75,000 viewers. Find out how The Gloaming stacks up against other Starz TV shows.

Will Starz cancel or renew The Gloaming for season two? This show originates in Australia and a second season is in development there. If a second season gets made, I suspect that Starz will air it. The ratings are very low however, even for a Starz series. I’ll update this page with breaking developments. Subscribe for free alerts on The Gloaming cancellation or renewal news.

What do you think? Do you hope that The Gloaming TV show will be renewed for a second season? How would you feel if this TV series was cancelled instead?

I love it. I hope it gets renewed and we won’t have to wait too long for S2.

I loved the gloaming. Why not another mysterious death to investigate? Please bring back for season 2.

I would like to see more of the series the Gloaming. And a lot more series that haven’t been airing. Such as the Spanish Princess.

He is absolutely my favorite actor.Love him

I started watching because of Martin Henderson and was immediately hooked! Hope there will be a season two!

I LOve this show. I hope it is.