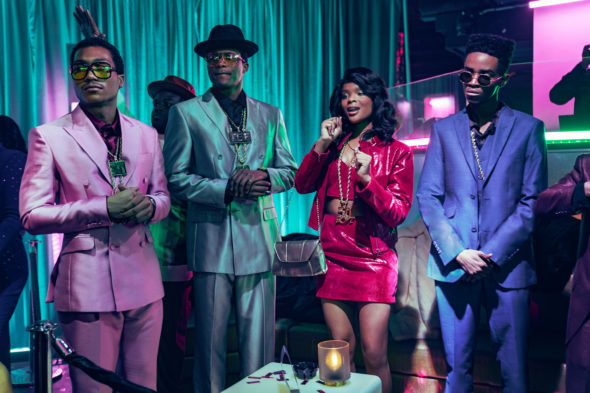 What will the brothers have to sacrifice in the first season of the BMF TV show on Starz? As we all know, the Nielsen ratings typically play a big role in determining whether a TV show like BMF is cancelled or renewed for season two. Unfortunately, most of us do not live in Nielsen households. Because many viewers feel frustrated when their viewing habits and opinions aren’t considered, we invite you to rate all of the first season episodes of BMF here. *Status update below.

A Starz crime drama series, the BMF TV show was inspired by a true story and stars Russell Hornsby, Da’Vinchi, Michole Briana White, Eric Kofi Abrefa, Ajiona Alexus, Myles Truitt, Demetrius Flenory Jr., and Steve Harris. Demetrius “Big Meech” Flenory (Flenory, Jr.) and Terry “Southwest T” Flenory (Da’Vinchi) are two brothers from the inner-city streets of southwest Detroit. In the late 1980s, they fostered the most prominent drug trafficking organization in the United States, known as “Black Mafia Family.” The story explores the brothers’ lives, their family dynamics, and their relationship with the community in a manner that highlights their upbringing in a traditional family unit. Their parents, Charles (Hornsby) and Lucille Flenory (White), as well as their spiritual advisor, Pastor Swift (Dogg), push the brothers to pursue formal educations. The tension between Meech and Terry’s blood family and the criminal family they form to eradicate themselves from poverty creates inner conflict as the brothers pursue the ever-elusive American Dream.

What do you think? Which season one episodes of the BMF TV series do you rate as wonderful, terrible, or somewhere between? Do you think that BMF should be cancelled or renewed for a second season on Starz? Don’t forget to vote, and share your thoughts, below.