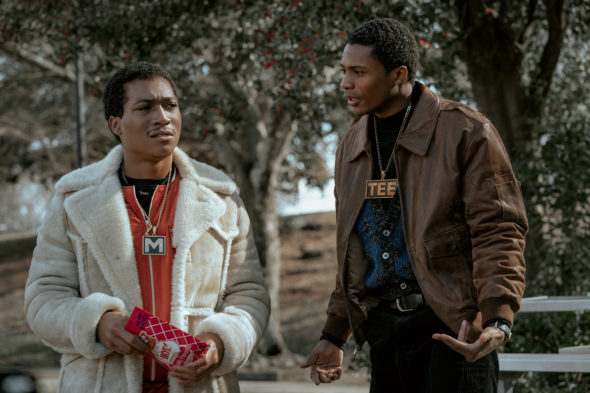 Which family is most important to the brothers? Has the BMF TV show been cancelled or renewed for a second season on Starz? The television vulture is watching all the latest cancellation and renewal news, so this page is the place to track the status of BMF, season two. Bookmark it, or subscribe for the latest updates. Remember, the television vulture is watching your shows. Are you?

Airing on the Starz cable channel, the BMF TV show was inspired by a true story and stars Russell Hornsby, Da’Vinchi, Michole Briana White, Eric Kofi Abrefa, Ajiona Alexus, Myles Truitt, Demetrius Flenory Jr., and Steve Harris. Demetrius “Big Meech” Flenory (Flenory, Jr.) and Terry “Southwest T” Flenory (Da’Vinchi) are two brothers from the inner-city streets of southwest Detroit. In the late 1980s, they fostered the most prominent drug trafficking organization in the United States, known as “Black Mafia Family.” The story explores the brothers’ lives, their family dynamics and their relationship with the community in a manner that highlights their upbringing in a traditional family unit. Their parents, Charles (Hornsby) and Lucille Flenory (White), as well as their spiritual advisor, Pastor Swift (Dogg), push the brothers to pursue formal educations. The tension between Meech and Terry’s blood family and the criminal family they form to eradicate themselves from poverty creates inner conflict as the brothers pursue the ever-elusive American Dream.

The first season of BMF averages a 0.12 rating in the 18-49 demographic and 379,000 viewers in the live+same day ratings (including DVR playback through 3:00 AM). While these numbers don’t include further delayed or streaming viewing, they are a very good indicator of how a show is performing, especially when compared to others on the same channel. There can be other economic factors involved in a show’s fate, but typically the higher-rated series are renewed and the lower-rated ones are cancelled. Find out how BMF stacks up against other Starz TV shows.

Will Starz cancel or renew BMF for season two? The show had a solid start and the cable channel could use some more successful dramas on its slate. I think it will be renewed. I’ll update this page with breaking developments. Subscribe for free alerts on BMF cancellation or renewal news.

What do you think? Are you glad that the BMF TV show has been renewed for a second season? How would you feel if Starz had cancelled this TV series, instead?