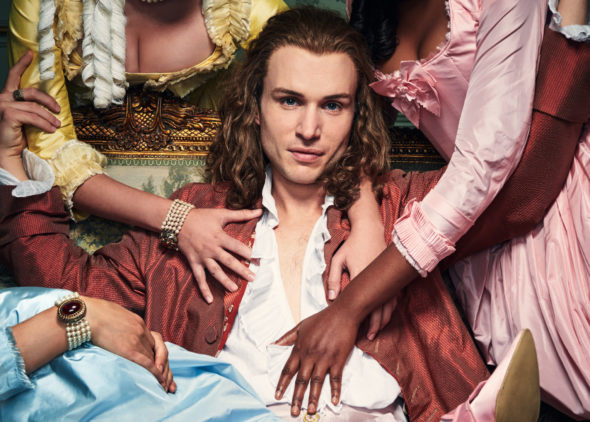 All’s fair in love and war. Has the Dangerous Liaisons TV show been cancelled or renewed for a second season on Starz? The television vulture is watching all the latest cancellation and renewal news, so this page is the place to track the status of Dangerous Liaisons, season two. Bookmark it, or subscribe for the latest updates. Remember, the television vulture is watching your shows. Are you?

A period drama series airing on the Starz cable channel, the Dangerous Liaisons TV show is a prequel to the classic 18th-century French novel. It stars Alice Englert, Nicholas Denton, Lesley Manville, Kosar Ali, Carice van Houten, Hilton Pelser, Fisayo Akinade, Michael McElhatton, Nathanael Saleh, Colette Dalal Tchantcho, Hakeem Kae-Kazim, and Tom Wlaschiha. The series revolves around the story of how the Marquise de Merteuil and the Vicomte de Valmont met as passionate young lovers in Paris on the eve of the revolution. In this time, Pascal (Denton) and Camille (Englert) are simply two young people who are dreaming of a better life together. Camille, who is taken in by the current Marquise de Merteuil (Manville), navigates her own path in a world of men, using the power of secrets to take back control. Meanwhile, Valmont will stop at nothing to regain the title that was recently taken from him. Their on-again-off-again love story is the heart of the series. Of course, it’s not love — it’s war.

The first episode of the first season of Dangerous Liaisons drew a 0.03 rating in the 18-49 demographic and 88,000 viewers. (The ratings for subsequent episodes are quite low, so there are some gaps in our reporting of them.) While these numbers don’t include further delayed or streaming viewing, they are a very good indicator of how a show is performing, especially when compared to others on the same channel. There can be other economic factors involved in a show’s fate, but typically the higher-rated series are renewed and the lower-rated ones are cancelled. Find out how Dangerous Liaisons stacks up against other Starz TV shows.

We don’t have to worry about Dangerous Liaisons being cancelled since the Starz series was given an early renewal for season two. That’s a good thing since the ratings are very low. I’ll update this page with breaking developments. Subscribe for free alerts on Dangerous Liaisons cancellation or renewal news.

What do you think? Are you glad that the Dangerous Liaisons TV show has been renewed for a second season? How would you feel if Starz had cancelled this TV series, instead?