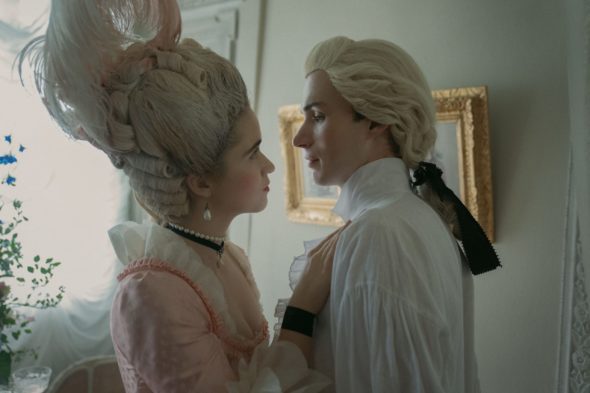 The new Dangerous Liaisons TV series arrives on Starz this weekend, and the period drama has already been renewed for a second season.

Starz revealed more about the renewal of the series in a press release.

Ahead of its November 6 series premiere, STARZ has greenlit a second season of “Dangerous Liaisons.” Season two of the seductive drama series, featuring the iconic literary lovers the Marquise de Merteuil (played by Alice Englert) and the Vicomte de Valmont (played by Nicholas Denton), is expected to begin production at the top of 2023 in Prague, Czech Republic.

“‘Dangerous Liaisons’ is addictive, provocative and beautifully rendered,” said Kathryn Busby, President, Original Programming at STARZ. “This prelude to the famed 18th century novel illuminates pre-revolution Paris at its most decadent. We are confident that by the end of season one viewers will be craving more scheming and seduction.”

“We’re greatly appreciative to STARZ and Lionsgate for their ongoing support of the show. We’re very excited to share Harriet Warner’s brilliant vision for season two, which will see our world expand and the relationships between our characters deepen in thrilling, dangerous new ways,” said executive producer Colin Callender.

STARZ previously announced that season one of “Dangerous Liaisons” is set to premiere Sunday, November 6 at midnight on the STARZ app, all STARZ streaming, and on-demand platforms and internationally on the LIONSGATE+ premium streaming platform across Europe, Latin America and Japan. On linear, it will debut on STARZ at 8:00 PM ET/PT in the U.S. and Canada.

“Dangerous Liaisons” is a bold prelude of Laclos’ classic 18th century novel focusing on the origin story of how his iconic characters, the Marquise de Merteuil and the Vicomte de Valmont, met as passionate young lovers in Paris on the eve of the revolution. This modern take on a classic story takes audiences through wonder and terror, beauty and degradation, seduction and deception in pre-revolutionary Paris. Driven to right the wrongs of their past, the young couple’s survival depends on their skills of seduction and manipulation of not only the French nobility but of each other. Alice Englert and Nicholas Denton portray the notorious lovers: Camille who is taken in by the current Marquise de Merteuil (played by Lesley Manville) navigates her own path in a world of men, using the power of secrets to take back control, and Valmont who will stop at nothing to regain his title that was recently taken from him. Their on-again off-again love story is the heart of the series. It’s not love… it’s war.

The series is produced for STARZ by Playground and Flame Ventures in association with Lionsgate Television. It was created and written by Harriet Warner, who also serves as showrunner and executive producer. In addition to Warner, Colin Callender (Playground), Tony Krantz (Flame Ventures), Scott Huff, and Christopher Hampton will continue to serve as executive producers on season two. Liz Gill has been added as Producer and Olly Blackburn will return to direct in season two. In addition to Englert, Denton, and Manville, the series stars Kosar Ali as Victoire, Carice van Houten as Jacqueline de Montrachet, Hilton Pelser as Gabriel Carrè, Fisayo Akinade as Chevalier de Saint-Jacques, Michael McElhatton as Jean de Merteuil, Nathanael Saleh as Azolan, Colette Dalal Tchantcho as Ondine de Valmont, Hakeem Kae-Kazim as Majordome, Tom Wlaschiha as Henri de Montrachet, and Paloma Faith as Florence de Regnier.

What do you think? Do you plan to check out Dangerous Liaisons on Starz this weekend?