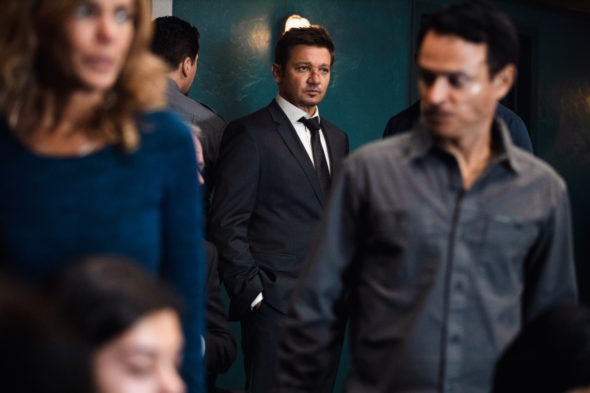 How long can Mike McLusky stay in business? Has the Mayor of Kingstown TV show been cancelled or renewed for a second season on Paramount+? The television vulture is watching all the latest cancellation and renewal news, so this page is the place to track the status of Mayor of Kingstown, season two. Bookmark it, or subscribe for the latest updates. Remember, the television vulture is watching your shows. Are you?

Streaming on the Paramount+ subscription service, the Mayor of Kingstown TV show stars Jeremy Renner, Dianne Wiest, Hugh Dillon, Taylor Handley, Emma Laird, Tobi Bamtefa, Derek Webster, Pha’rez Lass, Aidan Gillen, Hamish Allan-Headley, and Kyle Chandler. The story follows the McLusky family. They are power brokers in Kingstown, Michigan, where the business of incarceration is the only thriving industry. There are seven prisons within a 10-mile radius and Mike McLusky (Renner) is at the center of the action. He’s a conduit between the incarcerated and the outside world. He works with the city’s unofficial Mayor, aka his well-connected brother and business partner, Mitch (Chandler). Their younger brother, Kyle (Handley), is a police detective. Their mother, Mariam (Wiest), teaches inmates and is not happy with her sons’ business.

The series is a Paramount+ exclusive series but the first two episodes are being released on the Paramount Network cable channel. The first episode of Mayor of Kingstown attracted a 0.41 rating in the 18-49 demographic and 2.60 million viewers. Paramount+ doesn’t release traditional ratings data.

Unless they decide to publicize viewership, it is difficult to predict whether Paramount+ will cancel or renew Mayor of Kingstown for season two. Since Paramount+ isn’t ad-supported, it can take a chance on series it believes in, but sooner or later it comes down to production costs, versus viewership numbers. Given that Renner is a movie star and the lead of the show, I think that it will be renewed as long as he wants to continue.  I’ll keep my ears open and an eye out for news, and will update this page with breaking developments. Subscribe for free alerts on Mayor of Kingstown cancellation or renewal news.

2/2/22 update: Mayor of Kingstown has been renewed for a second season.

What do you think? Are you glad that the Mayor of Kingstown TV show has been renewed for a second season? How would you feel if Paramount+ had cancelled this TV series, instead?

Waiting anxiously for the mayor of Kingstown season 2

Please let there be a Season 2. I am loving this show~

Jeremy Renner if you read this, you must renew Mayors. You are too good in it not too. Don’t leave us hanging in 1 season please. It may have a slow start but people are now catching on. I love this show. Please bring us another season !

Please renewed season 2. So good look forward to seeing it every Sunday on paramount plus streaming.

Mayor of kingstown is the best show EVER!!! If they Paramount cancels this show they are complete idiots. My husband doesn’t watch TV, he can’t stand TV, but the night I watched the first episode of Mayor of Kingstown he was absolutely obsessed. This is by far the best show Paramount has ever had.

Yes definitely looking forward to season 2! Very intense and gets my heart pumping every time I watch it! I’m hooked!

Great show. I’m there for season 2.

Great concept and plot, writing, editing and script. Casting .
Recommend watching with caption to harvest in nuances. 1st time I’ve watched Renner. Intense and deep. Suggest that Paramont renew an extension. Thanks for taking ABC chance on this great concept

Not paying a extra 55 dollars a month For internet and Paramount plus for a one hour program once a week! Goodbye mayor of Kingstown gone and quickly forgotten.

You should of tried the free month subscription and watched the season and got a feel for Paramount plus. That’s a silly move.

Very Entertaining was very disappointing there’s only three episodes .I really hope they make a season two don’t cancel it !!I just don’t think everyone seen it yet or heard of it but it excellent. Looking forward to watching more!