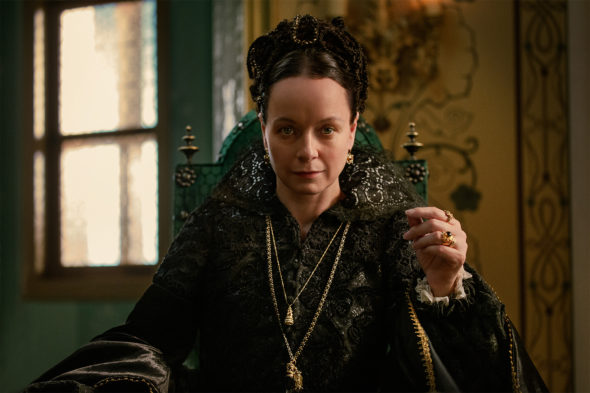 A period drama series, The Serpent Queen TV show stars Samantha Morton, Amrita Acharia, Enzo Cilenti, Barry Atsma, Nicholas Burns, Danny Kirrane, Sennia Nanua, Beth Goddard, Antonia Clarke, and George Jaques. The story follows Catherine de Medici (Morton) who, against all odds, became one of the most powerful and longest-serving rulers in French history. Catherine’s tale unfolds through flashbacks as she defends her actions and imparts the lessons she’s learned to her new servant girl, Rahima (Nanua). At 14, the young, orphaned Catherine (Hill) marries into the 16th-century French court. Despite her commoner status, her uncle Pope Clement (Dance), has negotiated a large dowry and a geopolitical alliance in return for the union, and with it comes the expectation of many heirs. However, on her wedding night, Catherine learns that her new husband is in love with Diane de Poitiers (Sagnier), a beautiful lady-in-waiting twice his age. With her future suddenly uncertain and with little hope of conceiving, Catherine must quickly learn who she can trust — both within her personal entourage of courtiers and the members of the royal court — while outmaneuvering anyone who underestimates her determination to survive at any cost.

Airing on Sunday nights, the first season of The Serpent Queen averages a 0.03 rating in the 18-49 demographic and 183,000 viewers in the live+same day ratings (including DVR playback through 3:00 AM).

Here’s the renewal announcement from Starz:

Santa Monica, Calif. – October 27, 2022 – STARZ announced today its popular, critically acclaimed series “The Serpent Queen” will return for an eight-episode second season with Golden Globe(R) winner, two-time Academy Award(R) and two-time BAFTA Award-nominated actress Samantha Morton starring as ruthless ruler Catherine de Medici. News of the renewal comes ahead of the series’ season one finale airing this Sunday, October 30 at midnight on the STARZ app, all STARZ streaming and on-demand platforms and internationally on the premium streaming platform LIONSGATE+ across all territories. On linear, it will debut on STARZ at 8:00 PM ET/PT in the U.S. and Canada.

A historical drama with an edge, “The Serpent Queen” puts a contemporary spin on conventional storytelling to tell the tale of Catherine de Medici (Morton) who against all odds, became one of the most powerful and longest-serving rulers in French history. The series begins when 14-year-old, orphaned Catherine marries into the 16th-century French court. With her future uncertain, she must quickly learn who she can trust – both within her personal entourage of courtiers and the members of the royal court – while outmaneuvering anyone who underestimates her determination to survive at any cost.

“‘The Serpent Queen'” is distinctly modern, darkly comedic and completely unexpected,” said Kathryn Busby, President, Original Programming, STARZ. “Catherine De Medici’s story is the perfect complement to our female-forward slate, and Samantha Morton’s brilliant portrayal of this ruthless, charming and savvy queen anchors the whole production. We’re thrilled to unveil more of her incredible life and reign in season two, which promises to be even more provocative and sublime.”

“The Serpent Queen” is based on the book Catherine de Medici: Renaissance Queen of France by Leonie Frieda and is from writer and executive producer Justin Haythe (Revolutionary Road, Red Sparrow, The Lone Ranger). The series is executive produced by Francis Lawrence (The Hunger Games: Catching Fire, The Hunger Games: Mockingjay, The Hunger Games: Mockingjay Part 2) and Erwin Stoff (The Matrix, 13 Hours, Edge of Tomorrow). Kathryn Tyus-Adair, Senior Vice President, Original Programming, is the executive overseeing “The Serpent Queen” for STARZ and Courtney Mock is overseeing for Lionsgate Television. The series is produced for STARZ by Lionsgate Television and 3 Arts Entertainment.

About STARZ
STARZ (www.starz.com), a Lionsgate company, is a leading global media streaming platform committed to delivering premium content that amplifies narratives by, about and for women and underrepresented audiences. STARZ is home to the highly rated and first-of-its-kind STARZ app that offers the ability to stream or download STARZ premium content, as well as the flagship domestic STARZ(R) service, including STARZ ENCORE, 17 premium pay TV channels, and the associated on-demand and online services. In 2018, STARZ launched its international premium streaming platform STARZPLAY, now LIONSGATE+, to provide subscribers access to bold, curated storytelling. LIONSGATE+, coupled with the STARZPLAY ARABIA joint venture in MENA and Lionsgate Play in South and Southeast Asia, has a footprint that extends across the globe. STARZ and LIONSGATE+ are available across digital OTT platforms and multichannel video distributors, including cable operators, satellite television providers, and telecommunications companies around the world. In February 2021, STARZ launched #TakeTheLead, a multi-faceted and innovative inclusion initiative expanding its existing efforts to improve representation on screen, behind the camera and throughout the company.

About Lionsgate
Lionsgate (NYSE: LGF.A, LGF.B) encompasses world-class motion picture and television studio operations aligned with the STARZ premium global subscription platform to bring a unique and varied portfolio of entertainment to consumers around the world. The Company’s film, television, subscription and location-based entertainment businesses are backed by a 17,000-title library and a valuable collection of iconic film and television franchises. A digital age company driven by its entrepreneurial culture and commitment to innovation, the Lionsgate brand is synonymous with bold, original, relatable entertainment for audiences worldwide.

About 3 Arts Entertainment
3 Arts Entertainment is a talent/literary management and production company, with 26 years of experience. We have offices in Beverly Hills and New York and have clients in the TV and Film Lit world, acting world, hosting world, branded areas, digital media and more. 3 Arts has produced hit films such as The Matrix, Austin Powers: Thy Spy Who Shagged Me, The Devil’s Advocate, Edge of Tomorrow and 13 Hours and more. We currently executive produce over 30 shows on the air. Some of our series include: “Julia,” “It’s Always Sunny in Philadelphia,” “Master of None,” “Unbreakable Kimmy Schmidt,” “Insecure,” and “Brooklyn Nine-Nine.”

What do you think? Have you watched The Serpent Queen on Starz? Are you glad that this period drama series has been renewed for a second season?

I loved the Serpant Queen! I wish it was not going to be more than one year before seeing season 2.

So glad its been renewed. Such a well-done and interesting part of history that is under

I loved it! Couldn’t wait for Sunday. Very happy it will be back. I’m a bit of a history lover but, so much natural and unnatural death, it’s hard to follow! This show has wonderful period settings and costumes!