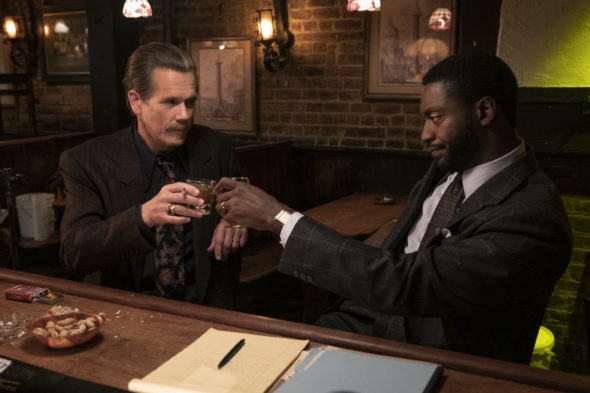 Rohr and Ward won’t be back for a fourth season. Showtime has cancelled the City On a Hill TV series, according to THR. The third season finished airing on September 25th.

A crime drama series, the City on a Hill TV show stars Kevin Bacon, Aldis Hodge, Jill Hennessy, Lauren E. Banks, and Matthew Del Negro, with guest stars including Corbin Bernsen, Joanne Kelly, and Ernie Hudson. The story unfolds in 1990s Boston and centers on Assistant District Attorney Decourcy Ward (Hodge), and his unlikely partnership with corrupt FBI Agent Jackie Rohr (Bacon). Season three centers on Boston’s high society of Beacon Hill. Having left the FBI and thrown his badge into Boston Harbor, Jackie Rohr (Bacon) lands a lavish new gig running security for a wealthy family. Life is good until secrets begin to unravel. When an investigation opens, ADA Decourcy Ward (Hodge) sees an opportunity to finally rip out the machinery perpetuating a broken criminal justice system. Siobhan Quays (Banks), representing a construction worker who was severely injured on the Big Dig, encounters the city’s corruption first-hand, all while coping with the traumatic events of her past year. As Jenny Rohr (Hennessy) can attest, given her history with her father, some experiences will haunt you beyond your breaking point.

Airing on Sunday nights, the third season of City On a Hill averages a 0.04 rating in the 18-49 demographic and 224,000 viewers in the live+same day ratings (includes all DVR playback through 3:00 AM). Compared to season two, that’s down by 3% in the demo and down by 41% in viewership. While these numbers don’t include further delayed or streaming viewing, they are a very good indicator of how a show is performing, especially when compared to others on the same channel.

Word is that the decision to cancel City on the Hill was made some time ago. “City on a Hill concluded its successful run on Showtime with its season three finale,” a statement from Showtime reads. “We have had nothing but the best experience working with Kevin Bacon, Aldis Hodge, and the entire cast and crew, led by showrunner Tom Fontana and fellow executive producers including Jennifer Todd and Jorge Zamacona. We offer our sincerest thanks to everyone.”

What do you think? Have you enjoyed the City On a Hill TV series? Are you sorry that this Showtime drama hasn’t been renewed for a fourth season?

I am extremely upset. The acting far surpasses that of other series on TV!!!! Kevin Bacon was just hitting his stride in developing that character . It had soooooooo much potential!
Very BAD move Showtime!!

Extremely disappointed with this decision. One of the best shows on televisions.
Huge mistake

I am so disappointed when I start loving a show, then they cancel it without a ending. If they want to cancel at least finish the story and not leave us hanging

this is a great show, Kevin is sooooo good in this, so is everyone else, but he really shines. sad.

I started watching it mid season in season 2 and have been addicted to it ever since. I guess now I will have to cancel Showtime.