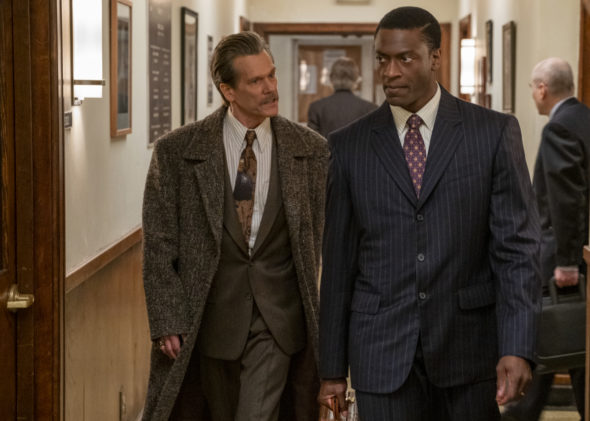 Will Jackie dig a hole too deep this time? Has the City On a Hill TV show been cancelled or renewed for a third season on Showtime? The television vulture is watching all the latest cancellation and renewal news, so this page is the place to track the status of City On a Hill, season three. Bookmark it, or subscribe for the latest updates. Remember, the television vulture is watching your shows. Are you?

Airing on the Showtime cable channel, City on a Hill stars Kevin Bacon, Aldis Hodge, Lauren E. Banks, Mark O’Brien, Amanda Clayton, Matthew Del Negro, and Jill Hennessy with guest stars Pernell Walker, Lucia Ryan, Kameron Kierce, Shannon Wallace, John Doman, and Michael O’Keefe. The story unfolds in 1990s Boston and centers on Assistant District Attorney Decourcy Ward (Hodge), and his unlikely partnership with corrupt FBI Agent Jackie Rohr (Bacon). Season two centers on a federal housing project in the Roxbury neighborhood that is plagued with drug violence and a rightful distrust in local law enforcement. As coalition leader Grace Campbell (Walker) works tirelessly on behalf of the community, her efforts are undermined by gang activity happening right under her nose. Rohr tries to exploit Boston’s defective criminal justice system in a desperate attempt to salvage his own career. Unfortunately for him, Ward is onto his adversary’s latest misstep. In time, the personal antagonism between these two escalates to an all-out war between the offices of the U.S. Attorney and the Suffolk DA. No one is safe from the collateral damage.

The second season of City On a Hill averaged a 0.04 rating in the 18-49 demographic and 379,000 viewers. Compared to season one, that’s down by 29% in the demo and down by 23% in viewership. Find out how City On a Hill stacks up against other Showtime TV shows.

Will Showtime cancel or renew City On a Hill for season three? The series has been a good performer for the channel and has two well-known stars. As long as Bacon and Hodge want to continue, I think this series will be renewed. I’ll update this page with breaking developments. Subscribe for free alerts on City On a Hill cancellation or renewal news.

6/3/21 update: City on a Hill has been renewed for a third season on Showtime.

What do you think? Are you glad that the City On a Hill TV show has been renewed for a third season? How would you feel if Showtime had cancelled this TV series, instead?

Love City on a Hill

Who wrote this? First season was a stellar show about crime and race in Boston. Second season is ludicrous plots missing 3/4 of the good characters from the first season. It went from a unique gritty thriller to “Greys Anatomy” with “intense” emotional faceoffs between each of the characters every episode and blew apart their entire audience in the process. Sad.

Hopefully City on a hill Renews

Season 3 needs them to go after the Whitey Bulger gang and the attempted resurrection of the Italian mob. I can help and would do it for free

The problem with City on a Hill is that as much as I love the show and Damon & Afleck some of the dialogue is wrong and I can offer a reality check and get new viewers. I have rubbed shoulders with the good guys and bad guys in Boston and would work on this show for free as a consultant and actor

PLEASE bing a series 3 and more

Great show! I love the whole cast. Please bring us a Season 3 and 4!!!

Best Showtime series EVER!! Kevin Fkng Bacon is BRILLIANT!!! Showtime we have a problem we need more Bacon! Must renew for another Season!!!