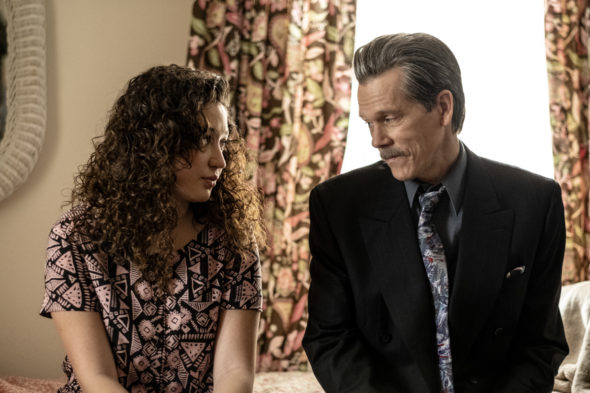 City on a Hill is adding to its cast for its third season. Corbin Bernsen, Joanne Kelly, and Ernie Hudson are joining Kevin Bacon (above, right) and Aldis Hodge on the Showtime drama.

The third season of City on A Hill will see Bacon’s character, John “Jackie” Rohr, working as security for a wealthy family. Things are going great until some secrets are exposed.

Deadline revealed the following about the roles the new arrivals will play on the Showtime series:

“Bernsen will play Sinclair Dryden, an old money Beacon Hill socialite and former outstanding FBI agent who has been a mentor to Jackie – but underneath the charm and charisma is a darker disposition.

Kelly will portray Letitia, the strong-willed wife of Sinclair who commands a sharp sense of humor. Having come from hardship, Letitia is willing to accept compromises in her marriage to maintain her lavish lifestyle.

Hudson is Franklin Ward, the widowed father of Decourcy. A Baptist minister in Brooklyn who was once a commanding presence and authority, Franklin is fading because of declining health.”

A premiere date for the upcoming season of City on a Hill will be announced at a later time.

What do you think? Are you excited about the return of this Showtime series?

Yes love it and will be interesting to see a change for Jackie. Can’t wait.

Love this show but wished Jackie would stay a Fed, it allows him to get away with anything.

Such great and intense acting. Kevin Bacon struts his stuff. I hope they come back every year!

Really happy there is a season three.
Good show

Can’t wait! I absolutely love this series, and am thrilled to see Kevin Bacon do a spectacular portrayal of Jackie Rohr. All of the other actors’ work is equally noteworthy. Thank you, Showtime, for giving us one great reason to resubscribe.

I enjoy the devious charActer of Kevin Bacon’s character, including how he is the only person that matters to him. Always comes out smelling like a rose. Lol.