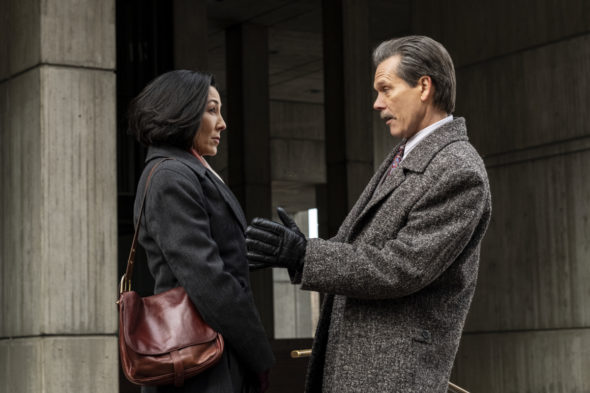 What’s Jackie up to in the second season of the City On a Hill TV show on Showtime? As we all know, the Nielsen ratings typically play a big role in determining whether a TV show like City On a Hill is cancelled or renewed for season three. Unfortunately, most of us do not live in Nielsen households. Because many viewers feel frustration when their viewing habits and opinions aren’t considered, we invite you to rate all of the second season episodes of City On a Hill here.  *Status Update Below.

A Showtime crime drama series, City on a Hill stars Kevin Bacon, Aldis Hodge, Lauren E. Banks, Mark O’Brien, Amanda Clayton, Matthew Del Negro, and Jill Hennessy with guest stars Pernell Walker, Lucia Ryan, Kameron Kierce, Shannon Wallace, John Doman, and Michael O’Keefe. The story unfolds in 1990s Boston and centers on Assistant District Attorney Decourcy Ward (Hodge), and his unlikely partnership with corrupt FBI Agent Jackie Rohr (Bacon). Season two centers on a federal housing project in the Roxbury neighborhood that is plagued with drug violence and a rightful distrust in local law enforcement. As coalition leader Grace Campbell (Walker) works tirelessly on behalf of the community, her efforts are undermined by gang activity happening right under her nose. Rohr tries to exploit Boston’s defective criminal justice system in a desperate attempt to salvage his own career. Unfortunately for him, Ward is onto his adversary’s latest misstep. In time, the personal antagonism between these two escalates to an all-out war between the offices of the U.S. Attorney and the Suffolk DA. No one is safe from the collateral damage.

What do you think? Which season two episodes of the City On a Hill TV series do you rate as wonderful, terrible, or somewhere between? Do you think that City On a Hill should be cancelled or renewed for a third season on Showtime? Don’t forget to vote, and share your thoughts, below.

*6/3/21 update: City on a Hill has been renewed for a third season on Showtime.

This is the best show on at the moment! Kevin Bacon kills it, quite literally, in the starring role. Can’t wait for season 3!!

Please renew. Like many tv series, this has been one of the greatest in my and many many viewers eyes hearts and souls. I’m betting 100% if this show was available on broadcast tv the ratings would soar sky high, no doubt. Boston MA is a very famous city and state for so much and to bring out a tv series about the good the bad and the ugly and play it with such an unbeatable cast is like no other show. Keep it going Kevin! One true and outstanding actor. I’ve watched you since Footloose and every movie and… Read more »

Please renew City on a Hill. It’s the only good series out there and the only reason to subscribe to showtime. I still haven’t forgiven the cancelation of Ray Donovan

This is a great show, I cant believe we are left hanging , Come on Season # 3Please !!!!

I love City On The Hill!! I can’t get enough of Kevin Bacon as Jackie Rohr! Just renew it already. Some of the storylines are kinda weird but keeping Jackie as the FBI hero is the way to go. Ward is a great guy but Jackie is always helping Ward out of things without Ward knowing Jackie is behind his successes.
Best show on Showtime. Can’t wait for third fourth seasons and beyond!

Just think commercial advertising didn’t do any of those things that why so low ratings. Its normal for cable channel. My opinion,

Cannot wait for the rest of this season. Why aren’t more people watching?! WATCHH

They sunk the storyline from the first season and injected a bunch of woke crap. No thanks. I quit.

Please boost your ratings so good look forward every day and enjoy it love it.