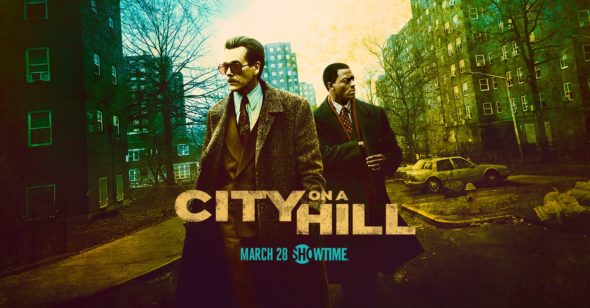 In its first year, City on the Hill was pretty successful for Showtime but, it’s now been more than 19 months since the cable channel aired a new episode. Have viewers forgotten about the series? Will City On a Hill be cancelled or renewed for season three? Stay tuned. *Status Update Below.

A crime drama series, City on a Hill stars Kevin Bacon, Aldis Hodge, Lauren E. Banks, Mark O’Brien, Amanda Clayton, Matthew Del Negro, and Jill Hennessy with guest stars Pernell Walker, Lucia Ryan, Kameron Kierce, Shannon Wallace, John Doman, and Michael O’Keefe. The story unfolds in 1990s Boston and centers on Assistant District Attorney Decourcy Ward (Hodge), and his unlikely partnership with corrupt FBI Agent Jackie Rohr (Bacon). Season two centers on a federal housing project in the Roxbury neighborhood that is plagued with drug violence and a rightful distrust in local law enforcement. As coalition leader Grace Campbell (Walker) works tirelessly on behalf of the community, her efforts are undermined by gang activity happening right under her nose. Rohr tries to exploit Boston’s defective criminal justice system in a desperate attempt to salvage his own career. Unfortunately for him, Ward is onto his adversary’s latest misstep. In time, the personal antagonism between these two escalates to an all-out war between the offices of the U.S. Attorney and the Suffolk DA. No one is safe from the collateral damage.

What do you think? Do you like the City On a Hill TV series on Showtime? Should it be cancelled or renewed for a third season?

Please boost your ratings so good look forward seeing every episode enjoy it and love it.