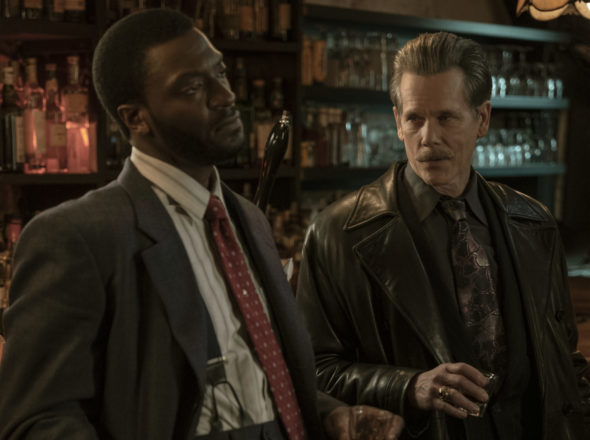 Jackie’s troubles are far from over. Has the City On a Hill TV show been cancelled or renewed for a fourth season on Showtime? The television vulture is watching all the latest cancellation and renewal news, so this page is the place to track the status of City On a Hill, season four. Bookmark it, or subscribe for the latest updates. Remember, the television vulture is watching your shows. Are you?

Airing on the Showtime cable channel, the City on a Hill TV show stars Kevin Bacon, Aldis Hodge, Jill Hennessy, Lauren E. Banks, and Matthew Del Negro, with guest stars including Corbin Bernsen, Joanne Kelly, and Ernie Hudson. The story unfolds in 1990s Boston and centers on Assistant District Attorney Decourcy Ward (Hodge), and his unlikely partnership with corrupt FBI Agent Jackie Rohr (Bacon). Season three centers on Boston’s high society of Beacon Hill. Having left the FBI and thrown his badge into Boston Harbor, Jackie Rohr (Bacon) lands a lavish new gig running security for a wealthy family. Life is good until secrets begin to unravel. When an investigation opens, ADA Decourcy Ward (Hodge) sees an opportunity to finally rip out the machinery perpetuating a broken criminal justice system. Siobhan Quays (Banks), representing a construction worker who was severely injured on the Big Dig, encounters the city’s corruption first-hand, all while coping with the traumatic events of her past year. As Jenny Rohr (Hennessy) can attest, given her history with her father, some experiences will haunt you beyond your breaking point.

The third season of City On a Hill averages a 0.04 rating in the 18-49 demographic and 222,000 viewers in the live+same day ratings (includes all DVR playback through 3:00 AM). Compared to season two, that’s even in the demo and down by 42% in viewership. While these numbers don’t include further delayed or streaming viewing, they are a very good indicator of how a show is performing, especially when compared to others on the same channel. There can be other economic factors involved in a show’s fate, but the higher-rated series are usually renewed and the lower-rated ones are cancelled. Find out how City On a Hill stacks up against other Showtime TV shows.

Will Showtime cancel or renew City On a Hill for season four? The show is one of the cable channel’s highest-rated series and stars two respected actors. As long as Bacon and Hodge want to continue, I think that Showtime will renew City on a Hill for a fourth year. I’ll update this page with breaking developments. Subscribe for free alerts on City On a Hill cancellation or renewal news.

What do you think? Do you hope that the City On a Hill TV show will be renewed for a fourth season? How would you feel if Showtime cancelled this TV series, instead?