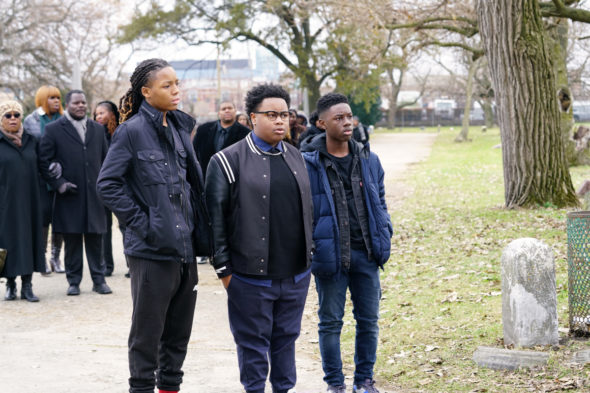 City on a Hill and The Chi viewers will not see new episodes this weekend. The Showtime series will be preempted this weekend and be replaced by the Jackass Forever movie on the streaming service.

A drama series, The Chi TV show stars Jacob Latimore, Alex Hibbert, Yolonda Ross, Shamon Brown Jr., Michael V. Epps, Birgundi Baker, Luke James, and Curtiss Cook. The story is a timely coming-of-age story centering on a group of residents on the South Side of Chicago who become linked by coincidence but bonded by the need for connection and redemption.

Showtime revealed more about the preemption in a press release.

Today, SHOWTIME announced that the hit drama series THE CHI and CITY ON A HILL will resume Friday, August 26 after taking a one-week preemption this weekend.

The upcoming schedule will roll out as follows:

Starring Emmy(R) nominee Kevin Bacon and Screen Actors Guild award winner Aldis Hodge, season three of CITY ON A HILL brings us to Boston’s high society Beacon Hill. Having left the FBI and thrown his badge into Boston Harbor, Jackie Rohr (Kevin Bacon) lands a lavish new gig running security for a wealthy family. Life is good until secrets begin to unravel. When an investigation opens, ADA Decourcy Ward (Aldis Hodge) sees an opportunity to finally rip out the machinery perpetuating a broken criminal justice system. Decourcy enlists the help of Sergeant Chris Caysen (Matt Del Negro), who puts more strain on his family responsibilities in order to root out the criminality in his own BPD unit. Siobhan Quays (Lauren E. Banks), representing a construction worker who was severely injured on the Big Dig, encounters the city’s corruption first-hand, all while coping with the traumatic events of her past year. As Jenny Rohr (Jill Hennessy) can attest, given her history with her father, some experiences will haunt you beyond your breaking point.”

What do you think? Do you look forward to either of these shows? Are you disappointed that City on a Hill and The Chi have been preempted?

Please renewed season 4 so good enjoy it and love it never missed any episode of it. Look forward to seeing it every Sunday night drama .

Jackass Forever has already been available for several weeks on Showtime Anytime. My understanding ,(per what I read on another site) is that The Chi and City on a Hill were actually preempted due to the HBO premiere of House of the Dragon. Readers may remember the Showtime series Billions was similarly preempted in May, 2019 when HBO aired the finale of Game of Thrones. Why does Showtime care what HBO is airing? Are HBO and Showtime affiliates of one another? I’m not a fan of the G.O.T. franchise however I do enjoy The Chi and City on a Hill,… Read more »

Love the acting/actors in The Chi and have been watching since the beginning. Lena Waithe is an amazing creator/writer and i hope she continues to grace us with her talents in this series.

To be pre-empted for a literal jackass movie is ludicrous. Showtime s/b ashamed to have been involved with this crap!

Love both series – The Chi and City on a Hill and hate waiting to see them again!

Very disappointed, watch the series every Sunday night… Showtime has let me down again !!! If the truth were to be actually told, instead of lying to your loyal fans !!! They were scared to go up against “HBO’s Enter the Dragon”. Once my subscription is up, Showtime will NO longer be viewed in my home !!!!

look forward to this every week. Pre-emption is rediculous.

City on a hill on Showtime tv channel with Kevin Bacon look forward to seeing it every Sunday night new season so good enjoy it and love it all episodes. Never missed any episodes of it. Please reconsider in renewed another season.