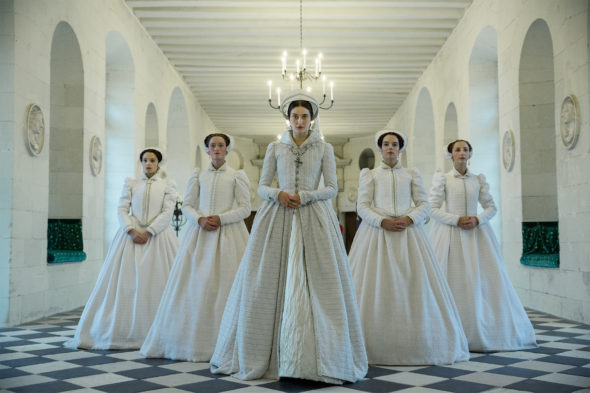 Catherine gets hit with a big surprise. Has The Serpent Queen TV show been cancelled or renewed for a second season on Starz? The television vulture is watching all the latest cancellation and renewal news, so this page is the place to track the status of The Serpent Queen, season two. Bookmark it, or subscribe for the latest updates. Remember, the television vulture is watching your shows. Are you?

Airing on the Starz cable channel, The Serpent Queen TV show stars Samantha Morton, Amrita Acharia, Enzo Cilenti, Barry Atsma, Nicholas Burns, Danny Kirrane, Sennia Nanua, Beth Goddard, Antonia Clarke, and George Jaques. The story follows Catherine de Medici (Morton) who, against all odds, became one of the most powerful and longest-serving rulers in French history. Catherine’s tale unfolds through flashbacks as she defends her actions and imparts the lessons she’s learned to her new servant girl, Rahima (Nanua). At 14, the young, orphaned Catherine (Hill) marries into the 16th-century French court. Despite her commoner status, her uncle Pope Clement (Dance), has negotiated a large dowry and a geopolitical alliance in return for the union, and with it comes the expectation of many heirs. However, on her wedding night, Catherine learns that her new husband is in love with Diane de Poitiers (Sagnier), a beautiful lady-in-waiting twice his age. With her future suddenly uncertain and with little hope of conceiving, Catherine must quickly learn who she can trust — both within her personal entourage of courtiers and the members of the royal court — while outmaneuvering anyone who underestimates her determination to survive at any cost.

The first season of The Serpent Queen averages a 0.03 rating in the 18-49 demographic and 189,000 viewers in the live+same day ratings (including DVR playback through 3:00 AM). While these numbers don’t include further delayed or streaming viewing, they are a very good indicator of how a show is performing, especially when compared to others on the same channel. There can be other economic factors involved in a show’s fate, but typically the higher-rated series are renewed and the lower-rated ones are cancelled. Find out how The Serpent Queen stacks up against other Starz TV shows.

Will Starz cancel or renew The Serpent Queen for season two? Since the story follows a real historical figure, we already know how the tale ends. The series feels like a one-season limited series, but Starz hasn’t promoted it that way. Unless the story ends after the eight-episode season, I think The Serpent Queen will be renewed. I’ll update this page with breaking developments. Subscribe for free alerts on The Serpent Queen cancellation or renewal news.

What do you think? Do you hope that The Serpent Queen TV show will be renewed for a second season? Do you think this Starz series will end after one season?