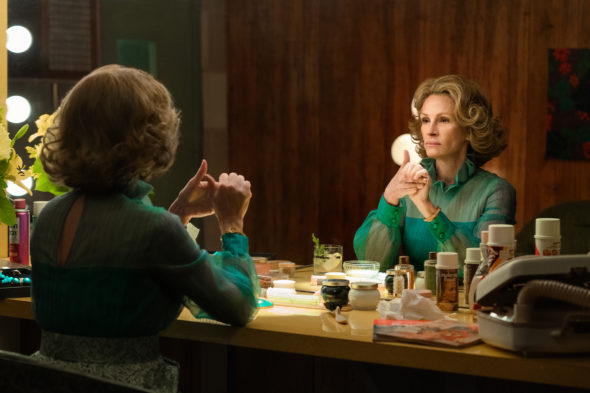 Is America ready for more about the Watergate scandal? Has the Gaslit TV show been cancelled or renewed for a second season on Starz? The television vulture is watching all the latest cancellation and renewal news, so this page is the place to track the status of Gaslit, season two. Bookmark it, or subscribe for the latest updates. Remember, the television vulture is watching your shows. Are you?

Airing on the Starz cable channel, the Gaslit TV show stars Julia Roberts, Sean Penn, Dan Stevens, Betty Gilpin, Shea Whigham, Darby Camp, and Aleksandar Filimonovic. The story is told through the lens of the lesser-known but still key players involved in the Watergate scandal and the downfall of America’s 37th president. They include Richard Nixon’s subordinates, the zealots aiding and abetting their crimes, and the whistleblowers who would eventually bring the whole enterprise crashing to the ground. At the center of the series is Martha Mitchell (Roberts), a woman with a big personality. She’s a celebrity Arkansan socialite and wife to Nixon’s loyal Campaign Chairman and former Attorney General, John Mitchell (Penn).

The first season of Gaslit averages a 0.01 rating in the 18-49 demographic and 211,000 viewers in the live+same day ratings (including DVR playback through 3:00 AM). While these numbers don’t include further delayed or streaming viewing, they are a very good indicator of how a show is performing, especially when compared to others on the same channel. There can be other economic factors involved in a show’s fate, but typically the higher-rated series are renewed and the lower-rated ones are cancelled. Find out how Gaslit stacks up against other Starz TV shows.

Will Starz cancel or renew Gaslit for season two? The series is based on true events so it seems likely that the story will end with the season finale. However, it is possible that the show could still be renewed as an anthology series with new seasons focusing on new stories but the ratings have been very low. I’ll update this page with breaking developments. Subscribe for free alerts on Gaslit cancellation or renewal news.

What do you think? Do you hope that the Gaslit TV show will be renewed for a second season, with a new story?