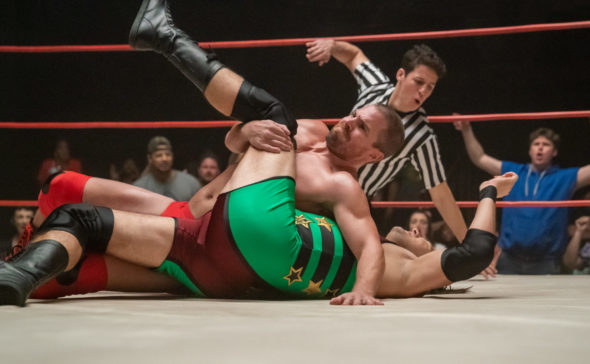 Is this series going down for the count? Has the Heels TV show been cancelled or renewed for a second season on Starz? The television vulture is watching all the latest cancellation and renewal news, so this page is the place to track the status of Heels, season two. Bookmark it, or subscribe for the latest updates. Remember, the television vulture is watching your shows. Are you?

Airing on the Starz cable channel, the Heels TV show looks at the men and women who chase their dreams in the world of small-town pro wrestling. The series stars Stephen Amell, Alexander Ludwig, Alison Luff, Mary McCormack, Kelli Berglund, Allen Maldonado, James Harrison, and Chris Bauer. Set in a close-knit Georgia community, the series revolves around Jack Spade (Amell) and his younger brother, Ace (Ludwig). The story follows a family-owned wrestling promotion business and the rivalry between the two brothers as they war over their late father’s legacy. In the ring, somebody must play the good guy and somebody must play their nemesis, the heel. But in the real world, those characters can be hard to live up to — or hard to leave behind.

The first season of Heels averaged a 0.02 rating in the 18-49 demographic and 91,000 viewers in the live+same day ratings (including DVR playback through 3:00 AM). While these numbers don’t include further delayed or streaming viewing, they are a very good indicator of how a show is performing, especially when compared to others on the same channel. There can be other economic factors involved in a show’s fate, but typically the higher-rated series are renewed and the lower-rated ones are cancelled. Find out how Heels stacks up against other Starz TV shows.

Will Starz cancel or renew Heels for season two? Though the ratings could be much better (Starz shows typically draw pretty low numbers), I think that Heels will still be renewed. I’ll update this page with breaking developments. Subscribe for free alerts on Heels cancellation or renewal news.

11/3/21 update: Heels has been renewed for a second season on Starz.

What do you think? Are you glad that the Heels TV show has been renewed for a second season? How would you feel if Starz had cancelled this TV series, instead?

I’m so glad it was renewed. Yes, yes and yes! It’s a great show. The ending was phenomenal and sad all at the same time.