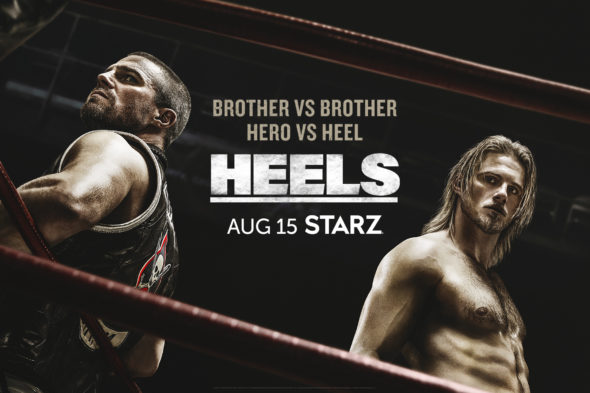 Stephen Amell (Arrow) and Alexander Ludwig (Vikings) have both been part of successful drama series in the past and have each done their share of on-screen fighting. The Heels TV show is a very different kind of series, however. Will it win the battle for ratings? Will Heels be cancelled or renewed for season two? Stay tuned.  *Status update below.

A wrestling drama, the Heels TV show looks at the men and women who chase their dreams in the world of small-town pro wrestling. The series stars Stephen Amell, Alexander Ludwig, Alison Luff, Mary McCormack, Kelli Berglund, Allen Maldonado, James Harrison, and Chris Bauer. Set in a close-knit Georgia community, the series revolves around Jack Spade (Amell) and his younger brother, Ace (Ludwig). The story follows a family-owned wrestling promotion business and the rivalry between the two brothers as they war over their late father’s legacy. In the ring, somebody must play the good guy and somebody must play their nemesis, the heel. But in the real world, those characters can be hard to live up to — or hard to leave behind.

Note: These are the final national ratings, including all live+same day viewing and DVR playback (through 3:00 AM). While these numbers don’t include further delayed or streaming viewing, they are a very good indicator of how a show is performing, especially when compared to others on the same channel. There can be other economic factors involved in a show’s fate, but typically the higher-rated series are renewed and the lower-rated ones are cancelled.

What do you think? Do you like the Heels TV series on Starz? Should it be cancelled or renewed for a second season?

I had to quit watching after the fifth episode. I was hatewatching it after a while. The first episode was so good. What a letdown. It should be renamed I’m Sorry, or Lovesick Alley.

Love this show! Keep it on TV Jack and ace are good looking man and they can wrestle it’s very entertaining show keep it on the air!

Please renewed another season so good look forward every Sunday night drama wrestling enjoy it and love it.

The live viewership has dropped each episode. This will probably have something to do if whether it will be canceled or renewed.

The first episode was good. Now, it’s turned into a Soap Opera. A poor one at that.

Totally love this show. this is the reason we haven’t cancelled our subscription. This and the Power Universe shows

Please boost your ratings so good look forward new series every episode of it. Love it and enjoy it. Never missed anyone.

So hard to find a show my whole family likes. This is one of those
Enough to to renew our subscription without not so much

So good since Black Sails treasure island prequel series look forward new series never missed any episodes of it. Please renewed another season. Enjoy it and love it.