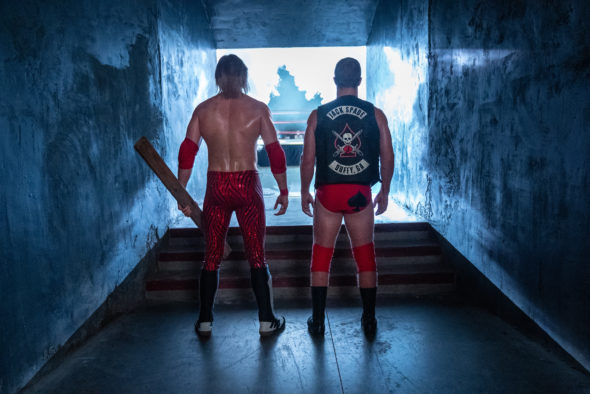 The fighting will continue for this pair of brothers. Starz has renewed the Heels TV series for a second season.

The Heels TV show looks at the men and women who chase their dreams in the world of small-town pro wrestling. The series stars Stephen Amell, Alexander Ludwig, Alison Luff, Mary McCormack, Kelli Berglund, Allen Maldonado, James Harrison, and Chris Bauer. Set in a close-knit Georgia community, the series revolves around Jack Spade (Amell) and his younger brother, Ace (Ludwig). The story follows a family-owned wrestling promotion business and the rivalry between the two brothers as they war over their late father’s legacy. In the ring, somebody must play the good guy and somebody must play their nemesis, the heel. But in the real world, those characters can be hard to live up to — or hard to leave behind.

Airing on Sunday nights, the first season of Heels averaged a 0.02 rating in the 18-49 demographic and 91,000 viewers in the live+same day ratings (including DVR playback through 3:00 AM). Starz, like other paid services, relies less on ratings than ad-supported channels.

Production on season two is expected to begin next year. Actors Trey Tucker and Robby Ramos have been promoted to series regular-roles for the second season.

“It’s clear from the critical and fan acclaim that the stories and characters from the Duffy Wrestling League have made a connection with audiences bringing a community that is not often found to premium TV,” said Jeffrey Hirsch, the President and CEO of Starz. “I’m excited for our amazing cast and executive producers to get back into the ring together for a second season.”

I want my belt back. pic.twitter.com/T9KqoJgEmJ

Check out our status sheets to track new TV series pickups, renewals, and cancellations. You can find lists of cancelled shows here.
What do you think? Have you watched episodes of the Heels TV series on Starz? Do you plan to check out season two?

I love this show ,I’m ready for season 2

I’m interested to see if the Duffy league expands and becomes bigger after their success at the state fair and how they deal with the success.