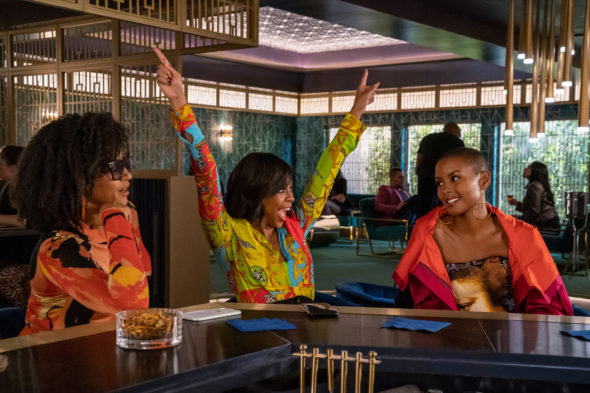 Can these ladies rule their world? Has the Run the World TV show been cancelled or renewed for a second season on Starz? The television vulture is watching all the latest cancellation and renewal news, so this page is the place to track the status of Run the World, season two. Bookmark it, or subscribe for the latest updates. Remember, the television vulture is watching your shows. Are you?

Airing on the Starz cable channel, the Run the World TV series was created by Leigh Davenport and stars Amber Stevens West, Andrea Bordeaux, Bresha Webb, Corbin Reid, Stephen Bishop, Tosin Morohunfola, Erika Alexander, Nick Sagar, and Jay Walker, with Tonya Pinkins guesting. The show follows a group of Black women — vibrant, fiercely loyal best friends — who work, live, and play in Harlem as they strive for “world domination”. Whitney Green (West) is a perfectionist who almost always plays by the rules. An audacious romantic, Ella McFair (Bordeaux) is figuring out what she truly wants both personally and professionally. Renee Ross (Webb) is the vivacious, soon-to-be-divorced diva with a seemingly thriving career while Sondi Hill (Reid) is an erudite professional who begins to reevaluate both her career and personal priorities. This series revolves around enviable friendships and a group of ladies who are not just surviving but thriving together..

The first season of Run the World averaged a 0.02 rating in the 18-49 demographic and 76,000 viewers in the live+same day ratings (including DVR playback through 3:00 AM). While these numbers don’t include further delayed or streaming viewing, they are a very good indicator of how a show is performing, especially when compared to others on the same channel. There can be other economic factors involved in a show’s fate, but typically the higher-rated series are renewed and the lower-rated ones are cancelled. Find out how Run the World stacks up against other Starz TV shows.

Will Starz cancel or renew Run the World for season two? The traditional ratings are quite small, even for a Starz series. However, I think this show will still be renewed so that more Starz subscribers will have a chance to find it. I’ll update this page with breaking developments. Subscribe for free alerts on Run the World cancellation or renewal news.

8/28/21 update: Run the World has been renewed for a second season.

What do you think? Are you glad that the Run the World TV show has been renewed for a second season? How would you feel if Starz had cancelled this TV series, instead?

I absolutely love this show!!! The casts seems to be a perfect fit together. They are educated, classy and sexy while maintaining an earthiness. The keep it all the way real!!!

I really hope there’s a season 2 I’m in love with these women. I absolutely love this show❤️

Loved the show a Run the World

I really hope this gets another season! There’s so many places they can take these characters

Loved the show! Hope it gets renewed for another season.

Please don’t cancel this series. My wife and I love it

I LOVE THIS SHOW!!! I really hope it’s renewed. I’d love to see where the characters end up throughout the next season. *Fingers crossed*

Love it, give us more.