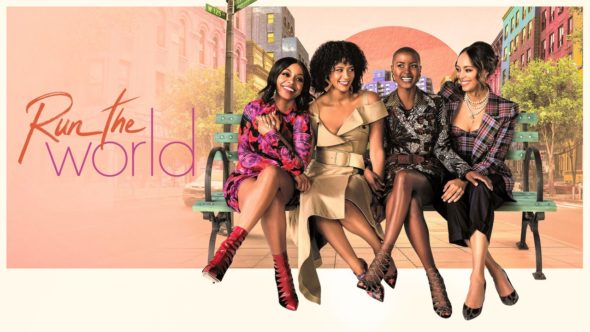 Starz revealed more about the return of the Run the World series in a press release.

The series follows a group of smart, funny and vibrant thirty-something Black women – fiercely loyal best friends – who live, work and play in Harlem. Run the World exemplifies STARZ’s #TakeTheLead commitment to spotlighting diverse voices and stories that reflect a full spectrum of women both in front of and behind the camera.

Tika Sumpter will recur as “Naomi,” the biological mother of Amari who has returned home from the Navy. With the assertiveness of a military officer, she immediately reclaims her position in Amari’s life, leaving Sondi to question her place in this new family dynamic.

Comedian CP will recur as “Preston Thurgood,” the multi-millionaire creator of Prestify, who has no need to put on airs. His hilarious, down-to-earth personality is plenty to get Renee’s attention; however, his lavish lifestyle certainly won’t hurt his case. Preston could give Renee everything she’s ever wanted, but is Preston the true love of her life?

Ishaa Blaaker will recur as “Phillip Houston,” Whitney’s business school rival who has returned from London fresh off a breakup of his own. His sexy British arrogance has Whitney flustered and their chemistry runs high. Now that they’re both single, Phillip is certainly interested.

Cree Summer will guest star as “Dr. Monica Mitchell,” the ladies’ wise and trusting new therapist. She allows Whitney, Renee and Sondi to pick up right where they left off with their retired therapist, Dr. Nancy. Dr. Monica’s direct, honest and personal approach allows the ladies to open up and navigate their relationship woes, as well as admit that they were kind of over getting advice from a white woman.

Ashley Blaine Featherson-Jenkins will guest star as “India Blue,” a beautiful, confident, cool and incredibly successful singer/songwriter/producer. India has been working closely with Jason and is now looking to move this “collaboration” into something more, despite Renee and Jason’s prior relationship.

A premiere date will be announced later.

What do you think? Are you looking forward to the return of Run the World on Starz?