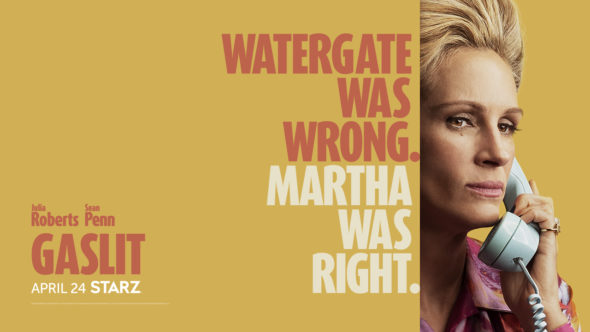 This show is based on the Watergate scandal of the 1970s and it presumably will come to a close after eight episodes. Could there be more of the story to tell in a second season? Could Starz renew the Gaslit series and choose to focus on a different tale? Stay tuned.

A historical drama series, the Gaslit TV show stars Julia Roberts, Sean Penn, Dan Stevens, Betty Gilpin, Shea Whigham, Darby Camp, and Aleksandar Filimonovic. The story is told through the lens of the lesser-known but still key players involved in the Watergate scandal and the downfall of America’s 37th president. They include Richard Nixon’s subordinates, the zealots aiding and abetting their crimes, and the whistleblowers who would eventually bring the whole enterprise crashing to the ground. At the center of the series is Martha Mitchell (Roberts), a woman with a big personality. She’s a celebrity Arkansan socialite and wife to Nixon’s loyal Campaign Chairman and former Attorney General, John Mitchell (Penn).

What do you think? Do you like the Gaslit TV series on Starz? Should it be renewed for a second season to focus on a different story?