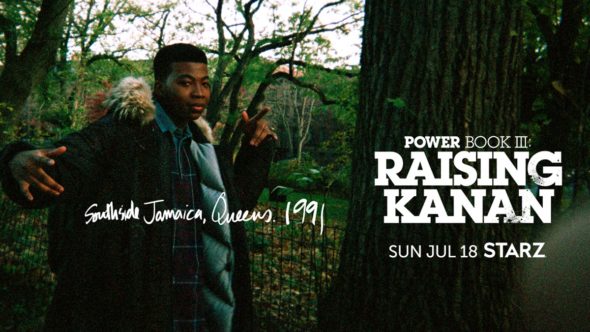 There’s no need to worry about Power Book III: Raising Kanan being cancelled right now since it’s already been renewed for a second season bu Starz. Will this newest entry be as popular as the original Power or Power Book II: Ghost series? Stay tuned.

A family drama series, Power Book III: Raising Kanan is a prequel to the Power TV series. The show stars Patina Miller, Mekai Curtis, Omar Epps, London Brown, Malcolm Mays, Hailey Kilgore, Joey Bada$$, Toby Sandeman, Shanley Caswell, Lovie Simone, Quincy Brown, and Antonio Ortiz. Set in 1991 in South Jamaica, Queens, this show’s story revolves around the coming of age of Kanan Stark (Curtis “50 Cent” Jackson). When we catch up with fifteen-year-old Kanan (Curtis) in the prequel, he is the only child of Raquel “Raq” Thomas (Miller), a cocaine distributor with an emerging network of dealers across the city. She’s a fierce and successful woman who is a force of nature and her son is anxious to join his family’s growing business.

What do you think? Do you like the Power Book III: Raising Kanan TV series on Starz? Are you glad that it’s been renewed for a second season?