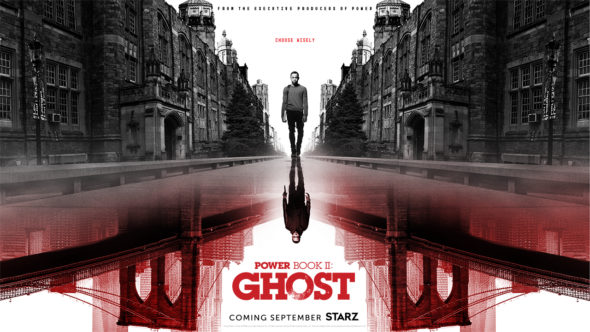 Airing for six seasons, the Power TV series attracted big ratings and lots of viewers for Starz. That show’s now ended but the story continues in a sequel series called Power Book II: Ghost. Will this new show be as big of a success? Will it be cancelled or renewed for season two? Stay tuned. *Status update below.

A crime drama series, Power Book II: Ghost stars Michael Rainey Jr., Naturi Naughton, Mary J. Blige, Clifford “Method Man” Smith, Daniel Bellomy, Gianni Paolo, Justin McManus, LaToya Tonodeo, Lovell Adams-Gray, Melanie Liburd, Paige Hurd, Quincy Tyler Bernstine, Shane Johnson, Woody McClain, and Sherri Saum. In the story, Tariq St. Patrick (Rainey Jr.) is a freshman at Stansfield University with a bright future ahead of him. He would be the embodiment of his father’s dreams, if not for the double life he’s living. With his mother, Tasha (Naughton), in jail for the murder of his father, Tariq is forced to split his time between school and hustling to pay for Davis MacLean (Smith), the fame-hungry defense lawyer. With no better options, Tariq turns to the familiar drug game, entangling himself with a cutthroat family headed by Monet Stewart Tejada (Blige).

What do you think? Do you like the Power Book II: Ghost TV series on Starz? Should it be cancelled or renewed for a second season?

*9/23/20 update: Power Book II: Ghost has been renewed for a second season on Starz.

This show is off the hook

Not feeling Power Book 2. Sadly a lot of spin-offs don’t stack up to the original and this is the case. When Ghost died, that should have been the end. Period. The new roles, characters, and story lines just don’t stack up. The younger demographics groups may like and relate to the show but not sure about larger more encompassing demographics that made the original Power so successful.

This show is very good I love it and all the new characters. I also love how they’re tied in the other stories that are soon to come that has Tommy coming back. I will hate it this show doesn’t come back for a second season. I’m starting to feel who ever cancel these shows are not really basing it on the fans. If they were this show would not be canceled.